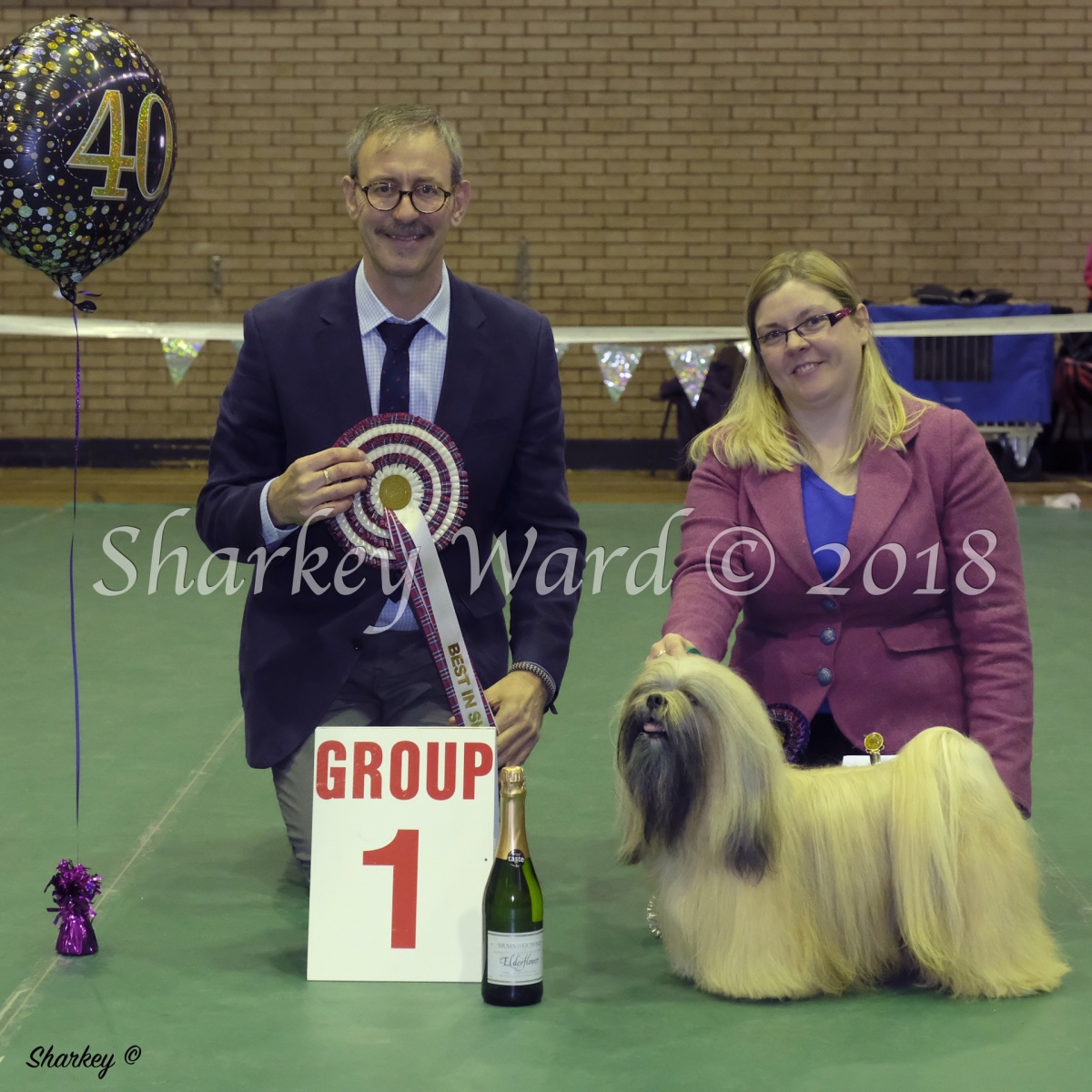 
The Scottish Utility Breeds Club celebrated their Ruby Anniversary in style, from the brightly decorated halls to the glasses of bubbly and pieces of celebration cake which were handed round before Best in Show was judged. The cake was baked by Barbara McDonald and cut by Mrs Yvonne Rawley, a founder member of the Club, who also judged poodles on the day.

With Mr Michael Gadsby invited to judge BIS, and Mr Tom Isherwood judging BPIS the Club drew a record entry of 155 dogs. The recreation centre at Bo’ness proved to be a good choice of venue with the two halls giving plenty of space for exhibitors, dogs and cages as well as spectators. The Committee did a great job of organising the day, they were well prepared by the time judging started promptly in Ring 1 at 9.30am and due to efficient stewarding and decisive judging, BIS was awarded by 2pm.

A wonderful array of cups and trophies were on offer to successful exhibitors and the show was generously sponsored by a number of Utility Group members, a special mention for the generous support from Mr & Mrs D Taylor for sponsoring BIS & BPIS and the poodle classes. All principal winners received a complimentary photograph by Dogfocus, www.dogfocus.co.uk, this was kindly sponsored by Balgay Kennel. Special thanks from Dogfocus go to Aileen McDonald for organising our attendance at the show. The atmosphere throughout the day made it a very pleasant occasion.

A note from the Secretary of the Club

Scottish Utility Breeds Club held their inaugural meeting on 10th July 1977 where a group of like-minded Utility exhibitors attended to consider forming a Utility Group Club.
The first meeting to form a committee was held in January 1978.
The club’s registration was approved by the Kennel Club in April 1978 and they went on to hold their first show on the 1st October 1978.
The club’s first Chairman was Mr J Currie.
The Hon Secretary was Miss P McKie who held the position till 1985 when she retired due to ill health.
The club has had four Hon. Secretaries between 1985 and 1993, Mrs F Main, Mr H Parsons, Miss H Cadiz and Mr B Stevenson.
I took over the role in the summer of 1993 and to this day continue to enjoy this very much.
The first and only Hon. Treasurer of the club, from 1977 to 2017, was the late Mrs S Martin who held the position for 40 years, no mean feat.
We have had great support from many individuals, too many to mention.
We thank all who have, over the years, been on the committee or have helped the club.
The club invites you all to join us today for a glass of bubble and a piece of cake to celebrate the last forty years and look forward to the future success of the club. 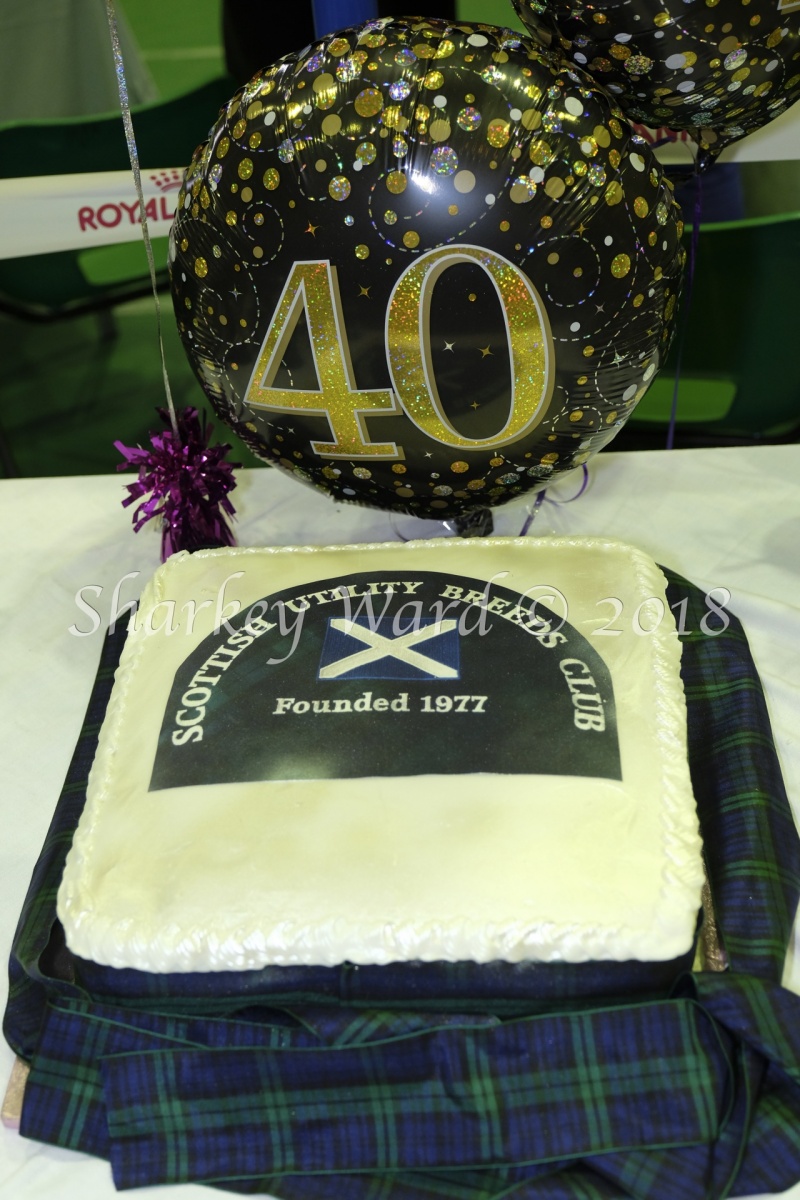 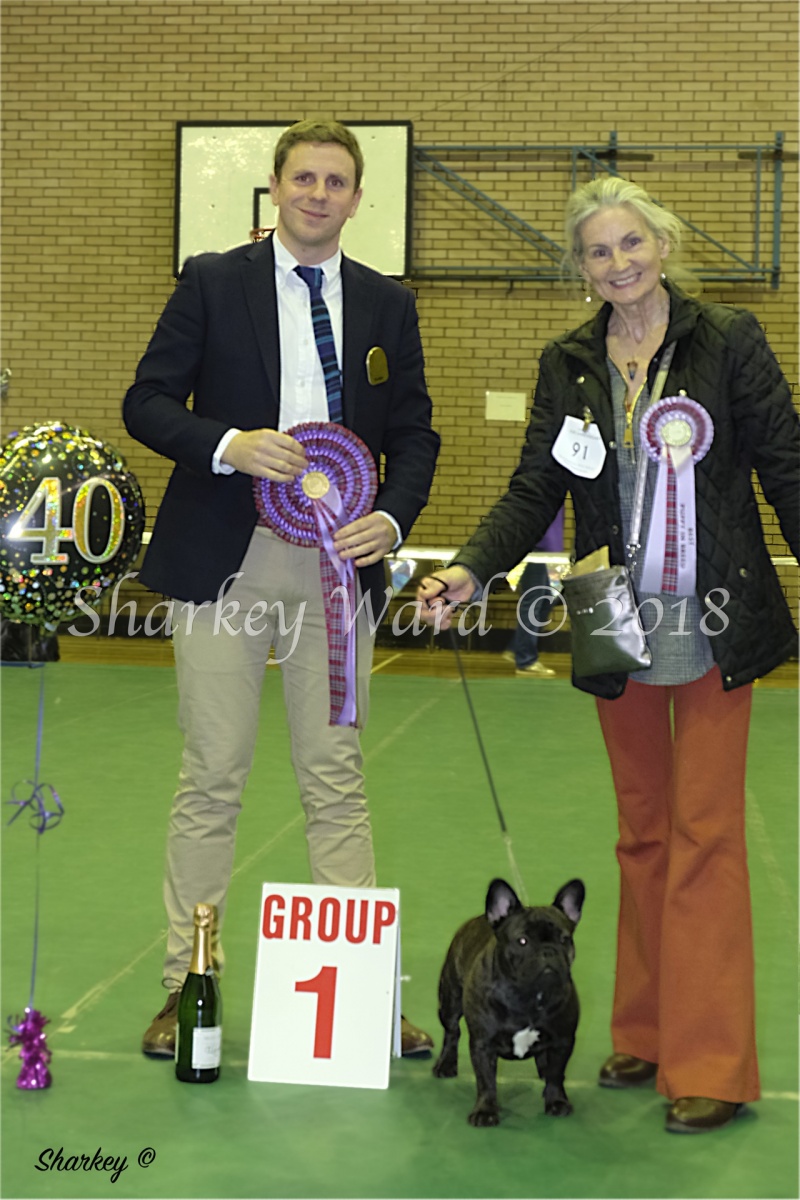 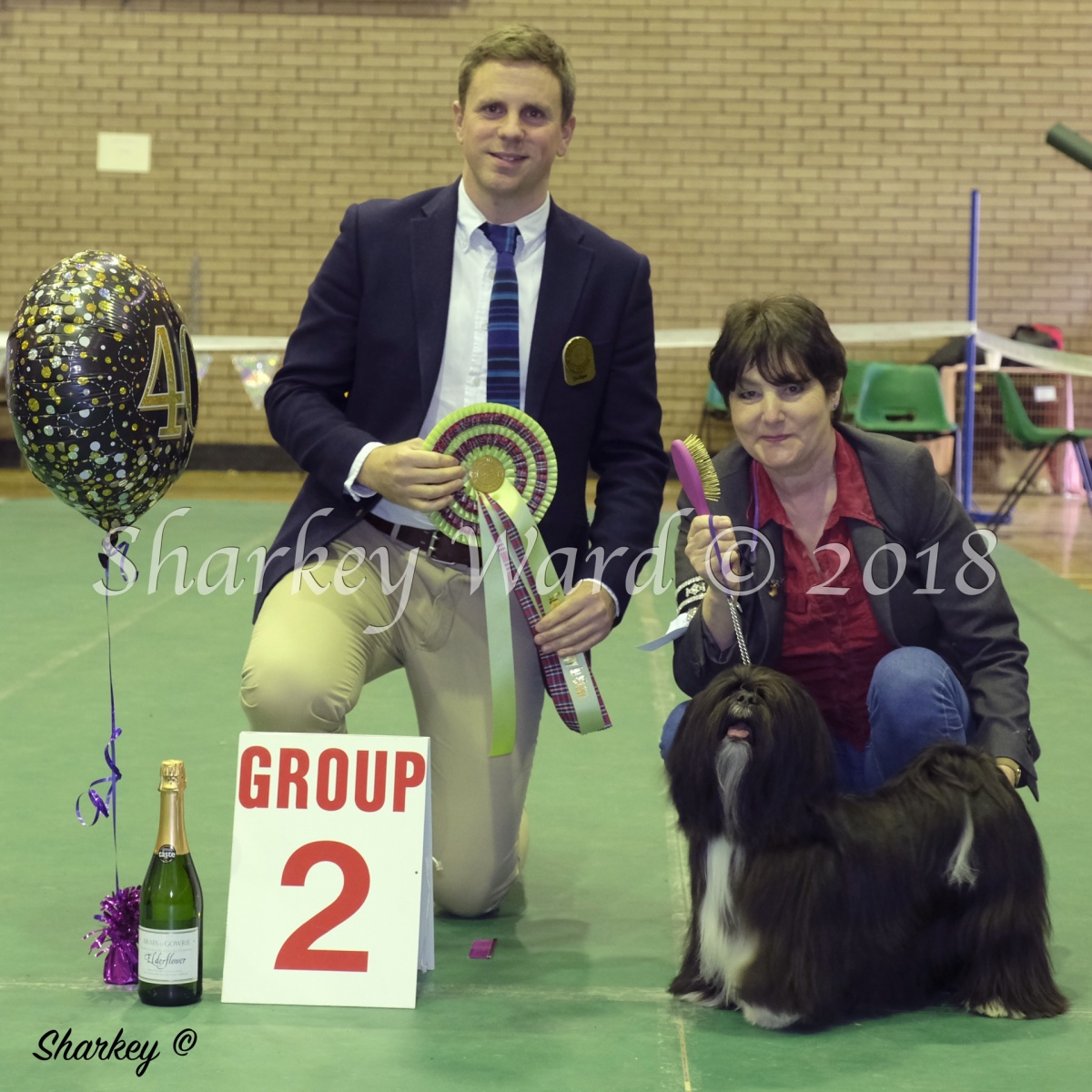 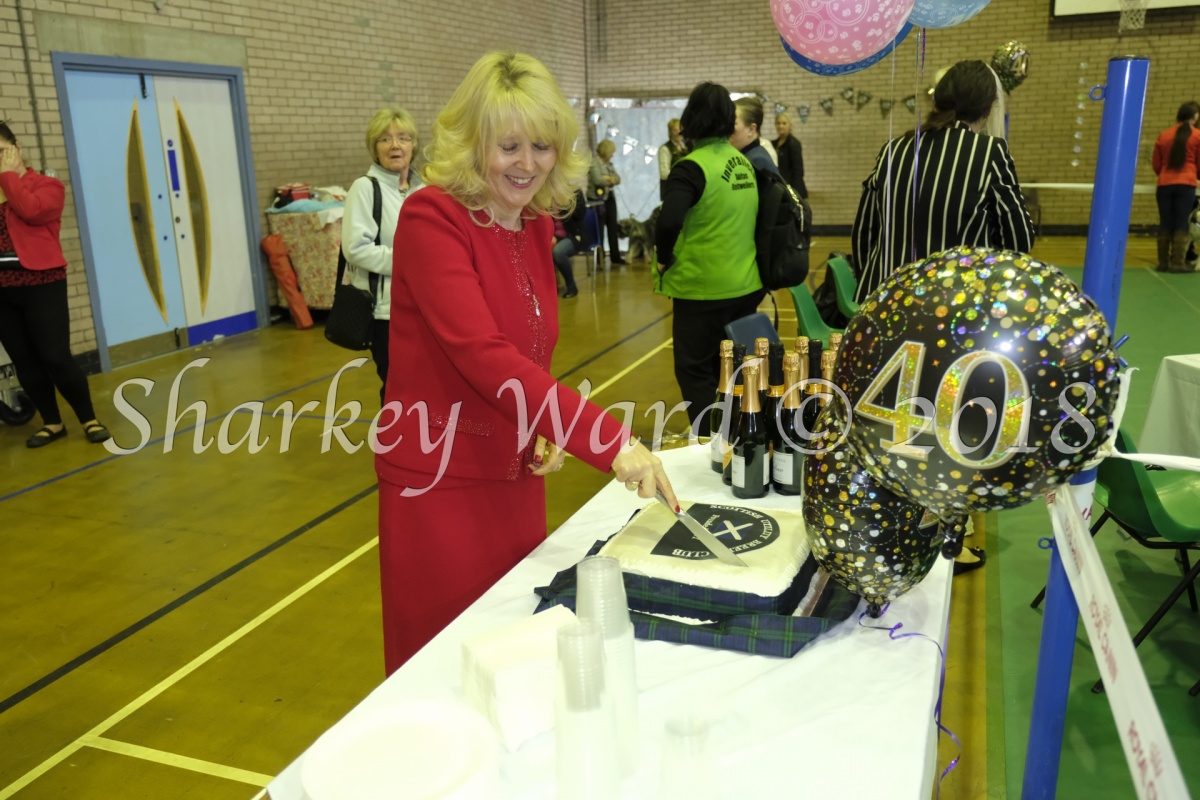 Baked by Barbara McDonald and cut by Mrs Yvonne Rawley, a founder member of the Club. 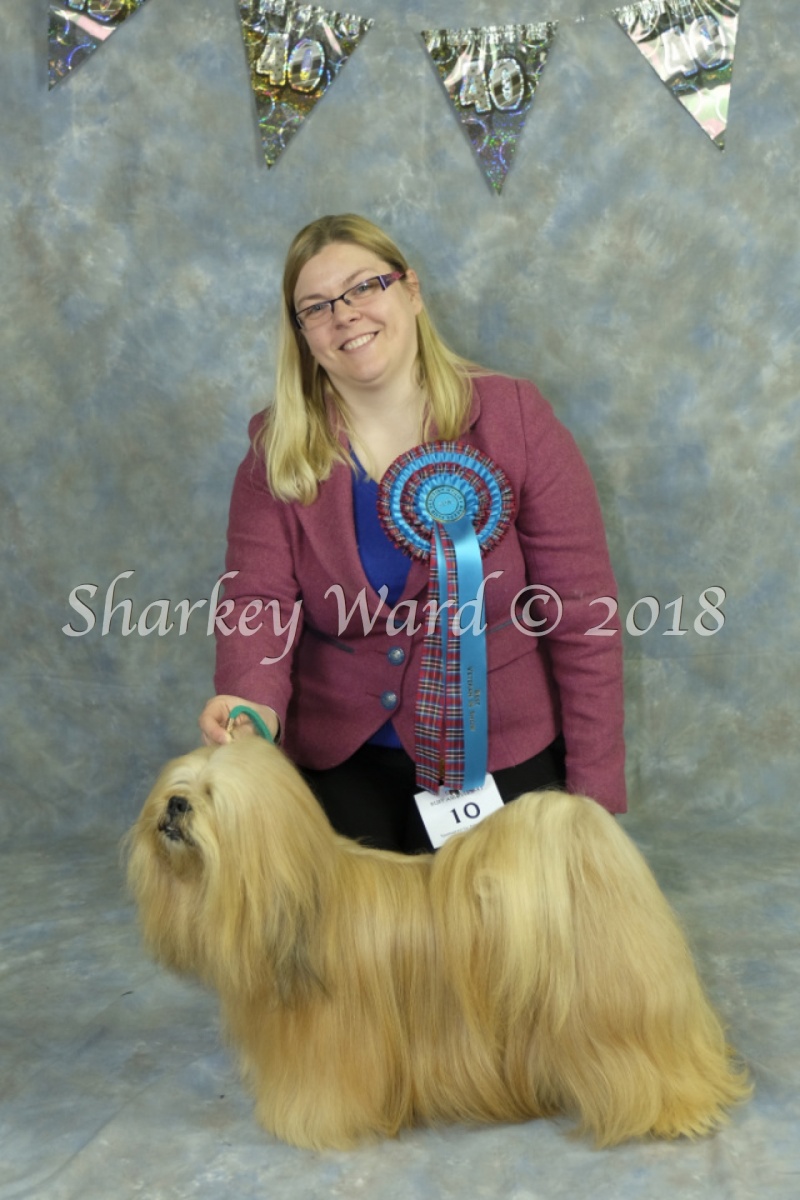 React to this show:
Growl
4 Wags