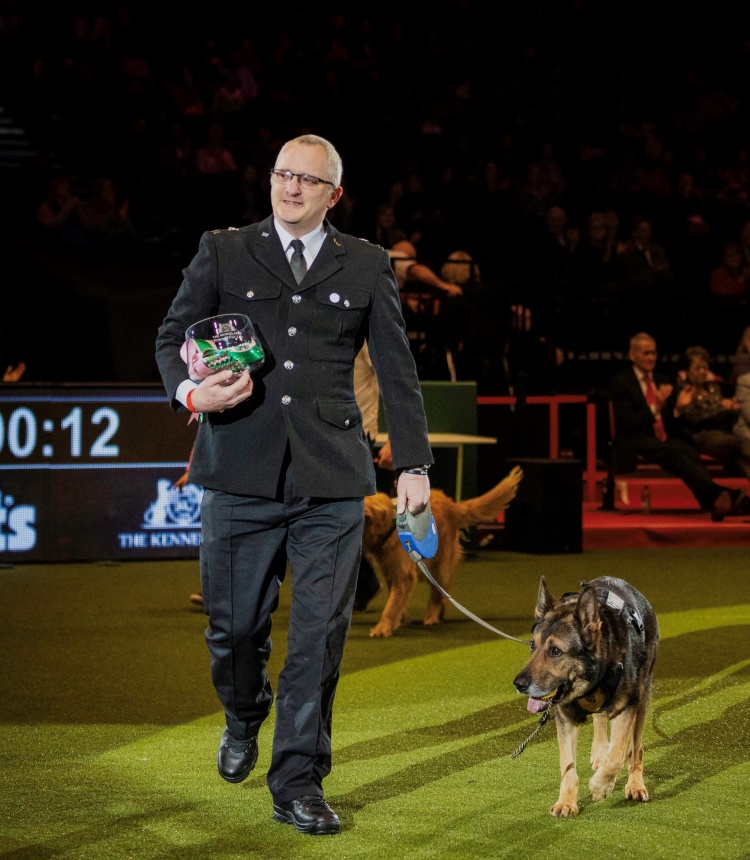 by the Kennel Club press team

Best in Show at Crufts 2019 was the Papillon, Multi Ch Planet Waves Forever Young Daydream Believers. Owned and handled by Kathleen Roosens, 'Dylan' is the first of his breed and the first dog from Belgium to win this award.

The show attracted an entry of nearly 21,000 dogs and was watched on TV on Channel 4 and More4 by 11.24 million viewers. All the action from the main arena, including the judging of Best in Show on the Sunday evening, was viewed online on YouTube by a global audience of over one million. Crufts had a Facebook reach of 21,770,062 people and the number of visitors to the show was 166,513, a record figure and nearly 1,000 up on last year.

Approximately 500 journalists attended the show, including from all the major national newspapers and TV networks, and with over 1,300 news items made both before and during Crufts. This included coverage which had been achieved as a result of 272 radio interviews, 65 photocalls, over 40 videos syndicated and more than 30 press releases generated by the Kennel Club press team.

Press coverage of the event has been largely positive, with much space allocated in the national and regional media to the various canine disciplines and initiatives embraced by the Kennel Club and highlighted at Crufts. Photos of the BIS winner Dylan appeared in most of the national newspapers the next morning and he and his devoted owner made an appearance on the Jonathan Ross Show on ITV a few days later, thus giving high-profile publicity to Crufts and pedigree dogs.

Retired Police Dog 'Finn' and his owner PC Dave Wardell were announced as the winners of the Kennel Club Friends for Life competition at Crufts on the final evening.

Finn was stabbed several times as he protected Dave from an armed attack in 2016, saving his life. Finn was badly injured and his fight for his life led the duo to launch the ‘Finns Law’ campaign, highlighting the value of all service animals and the injustice of their treatment in the law.

The campaign is driving a new Bill which aims to make attacking a service animal a specific criminal offence, which through sustained campaigning by Dave and Finn, is now in its final stages in the House of Lords.

The other finalists in the Friends for Life competition were Lance the Army arms and explosives search dog, Ringo the canine blood donor, Emma the assistance dog and Snoopy who was entered in the Child's Best Friend category.

For further details, go to https://bit.ly/2O3t1ta.

‘Spike’ is two years of age and has had a great start to his dog show career, winning the Junior Warrant, an award for pedigree dogs from the ages of 6 to 18 months which have won a series of first prizes at both open and championship dog shows, and has now followed this up with a major win at Crufts at the NEC, Birmingham.
Spike and Richard were up against nine other finalists for the coveted title but Spike and Richard wowed judge Stuart Plane in the exciting final.
The Junior Warrant Winner of the Year competition is held annually and is for dogs which have gained the title of Junior Warrant during the previous year.

There were heats held throughout the UK in 2018, with five dogs and a reserve selected by the judge at each of the heats. 62 top young dogs and their handlers were then invited to the semi-finals at the Kennel Club’s Discover Dogs event at ExCeL London, where ten finalists were selected to compete at Crufts.

Runner-up in the Junior Warrant final was the Australian Shepherd, Ch Allmark The Sequel JW ShCM, owned by Angie Allan and Andrew Winfrow from Oakham, Rutland and handled by Angie.

For further details, go to https://bit.ly/2HnEcMO.

The winners of the Kennel Club Dog and Bitch Obedience Championships at Crufts were, respectively, Stephanie Woollam of Bristol with Saartjie Luc and Kathy Russell of Ellesmere Port in Cheshire with Ob Ch Ruskath Makana Image, known as Zuri.

Both dogs are Working Sheepdogs and the judge was Philomena Barnes who herself won the Obedience Bitch Championship at Crufts last year with a Working Sheepdog.
Stephanie said of her success with Luc: “I am extremely happy and a bit shocked. Luc went into the parade and was very happy and enjoyed it and I thought he might put it all together today – not necessarily to win it, but just to do a good round. And he did – he went in there and did exactly what I wanted him to do.

Kathy commented on her victory with ‘Zuri’: “Winning at Crufts is a dream come true, as ultimately it’s what you want to achieve. Obedience is all about teamwork and Crufts is an entity in itself. Some people say you need a bit of luck, but I don’t think you need luck. You need a dog with a brilliant temperament to cope with the unique atmosphere. You cannot go to anywhere else in the UK to get the atmosphere of Crufts.

All competitors at the championships had made it through to the final from one of the 46 championship shows that hosted qualifying classes for the Crufts Obedience Championships.

Angie Allan from Oakham, Rutland has won the Kennel Club Breeders’ Competition at Crufts with her team of Australian Shepherds.

Judge Paul Harding selected Angie’s team for the prize as the breeder with the best overall quality evident in their dogs. Angie bred all four dogs in partnership with Robert Harlow from Sevenoaks in Kent.

All the dogs in the team are descendants of Champion Allmark Careless Whisper JW. Two are her children and two are her grandchildren.

Reserve best breeder was awarded to Averil Cawthera-Purdy from Cheltenham, Gloucestershire with her team of Pomeranians which she breeds under the Lireva kennel name.

The competition, sponsored by Agria Pet Insurance, involves teams accruing points at group and general championship shows throughout the year. Each team comprised three or four dogs of one breed, all bred by the same breeder or breeding partnership.

For further details, go to https://bit.ly/2TReRAW.

On the first day of Crufts, the Welsh Springer Spaniel Club, Welsh Kennel Club, and the Kennel Club all joined forces to support the Lucy’s Law campaign for Wales, in a ‘flash mob’ style display of unity from this iconic Welsh breed.

After recent confirmation by the UK Government that Lucy’s Law – the multi-award-winning campaign to ban third party selling of puppies by pet shops and other commercial dealers which will soon come into effect in England – all eyes are now on Wales to follow suit.

Sporting their own Welsh flag bandanas and bright pink Lucy’s Law rosettes, these beautiful dogs, and their owners, had a clear message for the Welsh Government – to spring into action and finally end the misery caused by the Welsh third party puppy trade.

For further details, go to https://bit.ly/2XYN68K.

Jane and ‘Barney’ won the competition in front of a packed Resorts World Arena at the NEC in Birmingham, beating 15 other vulnerable breeds to be crowned winner. Barney is no stranger to Crufts – he has been awarded Best in Breed for the last two years and this was his third appearance in the Vulnerable Native Breeds competition final.

The Kennel Club Vulnerable British and Irish Breeds competition helps raise awareness of rare native breeds whose annual puppy registrations stand at fewer than 300, thus leaving them at risk from disappearing from the UK’s streets and parks. Just 50 Skye Terriers were registered with the Kennel Club in 2018.

Barney was chosen by judge Paul Eardley as having the best overall quality evident from each of the 16 dogs representing their breeds.

The Kennel Club launched this competition for dog show exhibitors who show vulnerable British and Irish breeds, to raise awareness of these breeds and to recognise those who are dedicated to their survival and prosperity.

Dogs qualified for the final by winning Best of Breed at a designated group championship show during 2018.