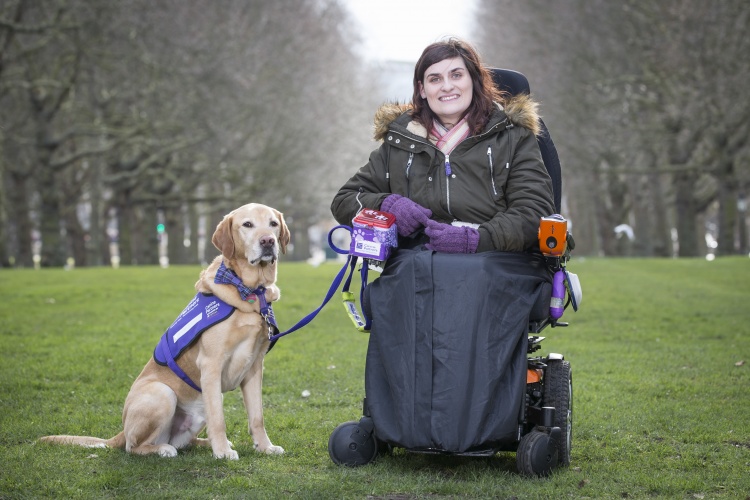 The Kennel Club today announce the finalists for the prestigious Crufts dog hero competition, Friends for Life 2018, at the official launch of Crufts 2018.

Clare Syvertsen and Griffin aged 29 from Northolt announced by the Kennel Club today as finalists for the prestigious Crufts dog hero competition, Friends for Life 2018, at the official launch of Crufts 2018.

Griffin and Clare were chosen from the Hero Assistance category. Clare was partnered with Canine Partner assistance dog Griffin four and a half years ago and they have been inseparable ever since.

Clare is a full-time wheelchair user as she was born with a very rare and complicated condition called Ehlers Danlos syndrome, which is a connective tissue disorder which affects her whole body. Clare’s joints easily dislocate and her skin is soft and stretchy which means she bruises and bleeds very easily. The condition also affects multiple organs. Before she got Griffin, Clare relied heavily on family and friends, having no independence and struggling to do simple things like getting out of bed on her own or even reaching for a can of drink which can cause her shoulder, wrist or fingers to dislocate. Since Griffin came into her life, everything has changed.


He supports Clare all day, every day with tasks that Clare finds difficult or impossible to do. He can do over one hundred tasks including opening/closing doors, loading and unloading the washing machine, help with dressing/undressing, picking up dropped items, getting the phone when it rings, helping Clare into bed, and he can even flush the toilet! Thanks to Griffin, Clare can now go out by herself and her family don't have to worry as much about her.

Griffin has given Clare so much more confidence and pride in herself, enabling her to have bigger dreams and goals. In 2015/16, Clare became seriously ill and could no longer eat solid food. She began to lose weight at an alarming rate, and at one point was rushed to hospital and diagnosed with GI failure and fitted with a feeding tube. All this time Griffin was close and wouldn't leave her side especially on the days where she couldn't even sit up; he would alert her when she was low in sugar and kept her safe. A true hero to Clare.


The annual Friends for Life competition at Crufts celebrates the unique relationship people have with their dogs, the important role man’s best friend plays throughout our lives and the support they give us in the face of adversity.

Judges from the Kennel Club, the UK’s largest dog welfare organisation, have selected five inspiring finalists to go forward for the public vote, with the winner being announced in the Genting Arena at the Birmingham NEC on the final day of Crufts, the world’s greatest dog show, on Sunday 11th M