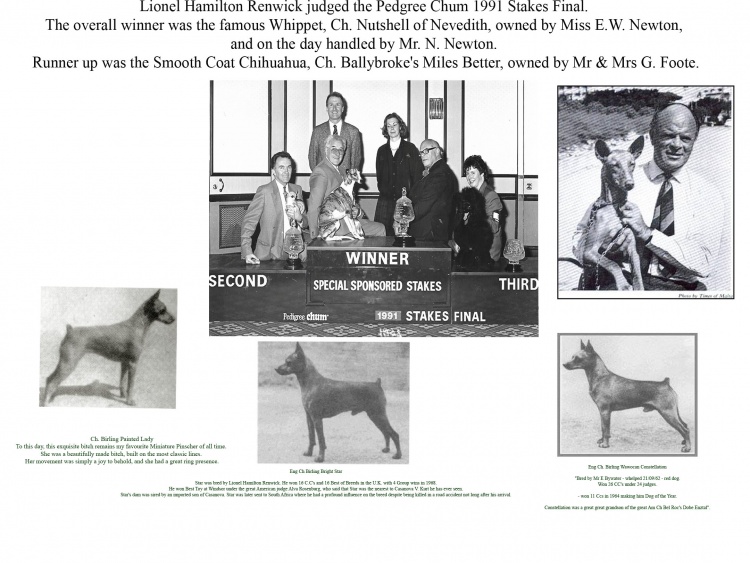 Lionel Hamilton Renwick was an equestrian artist for the Royal Family and other patrons of horseracing. He was also a breeder of animals including Siamese cats, Jersey cows, poultry, and miniature Shetland, spotted ponies. But dogs were Hamilton Renwick's real forte, and he was one of the U.K.'s leading and respected all round judges. He became the first person in Great Britain to establish a kennel of Dobermans and Miniature Pinschers, and he was amongst the first to introduce Pharaoh Hounds into this country.

My first recollection of Hamilton Renwick was at the Dumfries and Galloway Championhip Dog Show, c. 1968/70. W. Hindley Taylor was judging Min Pins and C.K.C.S. at this particular show, and as Bill was acknowledged as the country's leading toydog authority I was determined to visit the show and watch him judge. I approached the Min Pin ring and there, sat in a director's canvas chair, was Lionel Hamilton Renwick. He was stacking Ch. Birling Painted Lady upon his knees, and I was honestly mesmerised by this exquisite dog; the image remains firmly imprinted upon my memory to this day, and Ch. Painted Lady is still my favourite Min Pin of all time.


The Concise Oxford Dictionary defines “brilliant” as “Bright, illustrious, striking, talented", and as "a diamond of the finest cut and brilliance”. Lionel Hamilton Renwick was all of these – SIMPLY BRILLIANT.

NB. Lionel Hamilton Renwick was one of the first people to introduce the Pharaoh Hound into the U.K. I quote the words of Dr. Brian Sproule:-
"In 1968 when visiting the islands of Malta and Gozo he looked at over a hundred dogs. He once related :"as soon as I set eyes on (one dog) Tico standing on a stone wall silhouetted against the blue Mediterranean sky I knew my quest was over.
This was the dog I had dreamed about"
Lionel imported three other hounds at the same time and along with the late Mrs Pauline Block was responsible for establishing the breed in the British Isles. His bitch, Birling Zahara, had the distinction of being the first Pharaoh Hound to grace the, then, red carpet at Crufts in 1971. Subsequent offspring of his were exported throughout the world under the kennel name Birling".


Acknowledgements
Thanks to Chris Briggs and Lorraine Bolton for photographs supplied.

React to this article:
Growl
7 Wags