Otto And The Last Dinosaur By Martina Hamburger 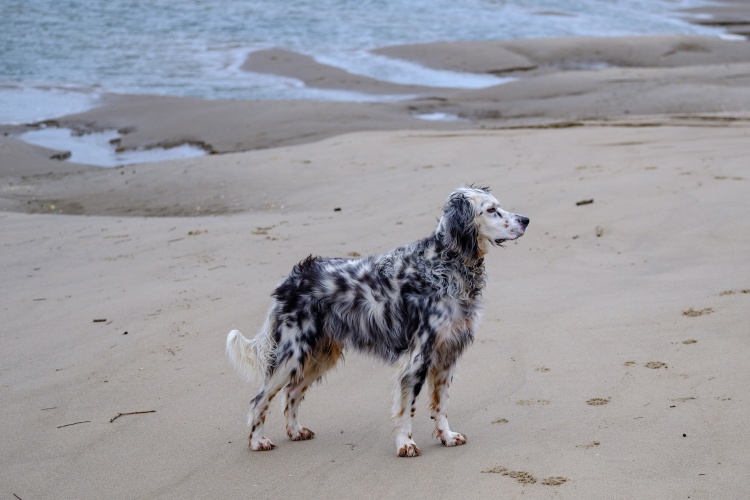 I have come to the conclusion that I am the last Dinosaur of the dog world. I have not just missed a chapter in the ‘how to keep a dog’ book, I’ve missed the whole library.

None of the ways in which I keep my dogs, seem to match any of what I read about dog keeping anymore. Positive reinforcement training, enrichment toys, social feeding are all phrases I hear, but do not relate to my dog keeping experience.

When English Setter Otto was handed to me at 10 weeks old, I took him home, cuddled him for a while then settled him in his dog bed for the night. Early the next morning, I called him and we walked out of the house and garden and down the lane together. I didn’t see the need for a lead. Where was he going to go? I was the only person he knew at the time.

I still do this with my various rescues (albeit in a more or less safely fenced field). I just figure that the sooner they chose to be my dogs, and to follow my lead, the better. And they all do.

I never carry treats on walks, to encourage my dogs to come to me. I don’t want them to follow the treats, I want them to follow me. And if one of them goes off into the forest for a while, I don’t hang around to wait for him. I continue on my walk and expect him to come and find me. That’s his job. They all do.

At home, I feed my dogs from plain old bowls, not slow feeders or puzzle bowls. They all eat in the same room together, they all eat up what’s given to them, and then they all go out for their after dinner ablutions. No hanging about, no attempts to take food off the slower or lower ranking dogs. I wouldn’t stand for that. Anybody who tries, quickly gets grabbed and put outside. And they all learn.

They all queue up for their after walk showers and jump on the shower table. Any reluctance and they swiftly get picked up and put where they’re supposed to be. One of my rescues doesn’t like to be handled, so he’s allowed a few extra seconds to make up his mind. And he always choses to do the right thing. A choice that is rewarded with praise and attention. That’s how they learn.
In the house, the dogs sit around and look out of the windows, or they groom themselves. Mostly they sleep. Very rarely one will pick up one of the few soft toys we have. If they start playing too wildly, I put them outside, to play there. They do for a while, then they come back. My dogs have no antlers, bones or rawhide toys to chew on and no enrichment toys to stimulate them. If they want to chew, there are sticks in the garden. Once in a while one of them, a rescue, helps himself to plastic bottles from the recycling bin. I guess he gets a bit anxious when we leave them alone for more than a couple of hours. If I leave food about, he will steal it too, so I don’t. That’s how I learn.

My deaf dog follows hand signals and constantly checks for me, he wears bells, so I can hear him and so I can check for him. He also – shock, horror, - wears a vibration collar. This is for emergency stops only and is used once in a blue moon. You can call me cruel, if you like, but I’d rather give him the equivalent of the shock one gets from a door handle, than see him run over by a 12 ton forest lorry. When I do use it, he flinches, turns and runs straight to me. I give him a cuddle and that’s that.

My dogs know the rules and they all seem keen to follow them. If they don’t, they are corrected. This usually takes the form of removing them from the situation. They end up outside or alone in the dog room. And they learn.

I never hit or hurt my dogs, I don’t believe that shouting at them achieves anything (although I do sometimes, let’s face it, we all get frustrated). The only bargains I make with them, is for distraction. ‘Here, chew a toy, not my hand’, is a regular suggestion for my friend’s dog, who likes mouthing people.

When my rescue dogs first arrived, they enjoyed getting up with the first light and bird song. I don’t so much. Assuming that they might need the loo, I’d let them out, but would bring them in again as soon as they’d performed. They soon learned that those early outings were pointless, as playing or bird chasing wasn’t on the agenda. And they soon learned to sleep in and to wait until a more reasonable time before waking me.

Not all is perfect in Dinosaur land though, two of my dogs have an obsession with barking at my farming neighbour, who twice a day passes my house, on his way to check on his sheep. When indoors, my two will dance on the window seats and bark at full volume. When they happen to be indoors, they will chase along the fence and bark even louder. On the rare occasion that I am on hand to distract them, this works, but mostly the barking just happens. Maybe I need to consult the relevant chapter or book in the ‘how to keep a dog’ library after all.
It may also teach me, how to convince my dogs to inform me of the arrival of strangers. Because, as much as they bark at my neighbour and friend, they often can’t be bothered to tell me about other things happening on my property. But then, William Morris said ‘have nothing in your houses that you do not know to be useful, or believe to be beautiful’, and English Setters firmly fall in the second category.

As sorry as you may feel for Otto and his brothers, for having to live with this dog keeping Dinosaur, I honestly don’t think he has too many complaints. He doesn’t rule the roost, this is my house and he has to respect my rules, but I don’t think he actually expects differently. When he steps out of line, I don’t worry much about telling him off and about hurting his feelings, but then, neither does he. He is, after all, a dog, not a human being. Anthropomorphism may be an innate tendency of human psychology, but who ever said it was good for animals?

React to this article:
1 Growl
12 Wags