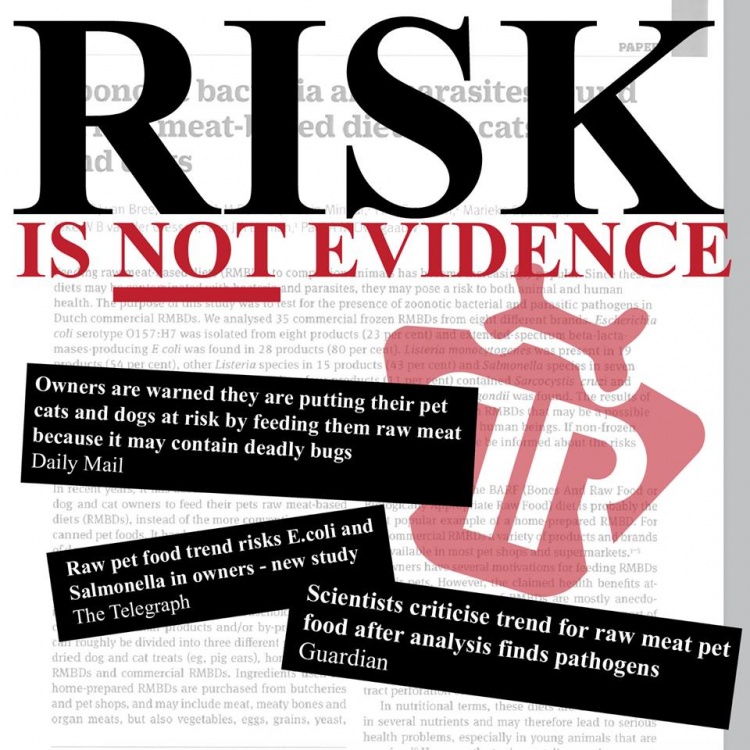 Raw feeding dogs: The FACTS. Not the load of bull you have been led to believe


There are millions of bacteria all around us, yet only an estimated less than 1% are harmful. Society have purported bacteria to be something that must be eradicated and attempt to do this by over use of products to kill “99.9% of bacteria”, using disinfectants, antibacterial everything, as well as over vaccination. Biologists have found out that bacterial exposure is completely necessary for the development of a healthy immune system, among other things. Us as humans and our pets have evolved with bacteria.

Feeding raw food to dogs is dangerous for people and dogs

The anti raw feeding lobby quote the above myth as a main reason for not feeding raw. Is there is bacteria in raw meat?, yes there is. But this does not persist in the mouth of a raw fed dog, Why? because they have something called lysozyme in their saliva, an enzyme that kills bacteria, also their short digestive tract is designed to push food and bacteria through really quickly without giving bacteria time to colonise. The extremely acidic environment of the stomach stops the bacteria from colonising. Every dog and person naturally has both salmonella and E. coli in their gut.
People often point out that dogs shed salmonella in their faeces as a reason raw feeding is dangerous. The reality of this only proves that the dog has effectively passed the salmonella through its system with no problems. Dogs can be salmonella carriers, but the answer is simple—do not eat dog poo and wash your hands after picking up after your dog. It’s not rocket science!.
Also the absence of plaque in a raw fed dogs mouth means bacteria do not like that environment. Many immunosuppressed people have raw fed their dogs for many years without getting sick and in fact have stronger immune systems.
Kibble food on the other hand however, causes plaque covered teeth (and no it doesn’t “clean” your dogs teeth as raw food companies and vets would have you believe). It merely deposits sugar and starch on your dogs teeth which then turns to plaque, and creates the perfect environment for bacteria to grow and multiply.(Just look at the number of kibble fed dogs who have to have dental treatments including teeth cleaning). A kibble-fed dog's mouth, therefore, provides the perfect environment for bacteria growth:(Lonsdale, T. 2001. Raw Meaty Bones.). So a dog fed which type of food would you be more worried about getting bacteria from? I personally would prefer to get close to the fresh smelling mouth of a raw fed dog with sparkly clean white teeth.

Next, bacteria in the faeces of raw fed dogs. Hopefully, if you or your family go anywhere near dog poo, you wash your hands?. We know that hand washing with soap and water is the most effective way to remove bacteria. So not a problem.
Also, does this mean that everyone stop eating meat themselves, because of the risk from bacteria on raw meat? Every day people buy raw meat and prepare it without contracting salmonella or any other stomach churning bacteria. Why? Because people wash their hands with soap and water after handling raw meat :basic raw meat handling common sense. Exactly the same meat and way raw feeders prepare and feed their dogs: also, meat that is DEFRA approved.

Many Vets and anti raw feeders would have you believe that raw feeding is a new “fad”. Let me ask this question where does raw feeding come from?
I would say Mother Nature. Look at wolves that our pet dogs are descended from and what they eat and have always eaten. Then look at kibble and it’s very short 100 yr history and then think, which is the “fad” diet. Dogs are carnivores, which makes a lot of kibble food, totally species inappropriate, due to the high carbohydrate content.

Aflatoxin b1 has been found in many kibble dog foods
From DOGS NATURALLY MAGAZINE
“Grains such as corn, wheat, and rice, as well as nuts and legumes, are often contaminated with moulds, often as a result of poor growing conditions, substandard or extended storage. Moulds called Aflatoxins can easily grow and produce a very potent carcinogen. Aflatoxins are very stable and even the high temperature processing involved in kibble manufacturing won’t destroy them, leaving little protection for any dog eating that food”.
From the European Food Safety Authority
“Aflatoxins are mycotoxins produced by two species of Aspergillus, a fungus which is especially found in areas with hot and humid climates. Since aflatoxins are known to be genotoxic and carcinogenic, exposure through food should be kept as low as possible.
Aflatoxins can occur in foods, such as groundnuts, tree-nuts, Maize, rice, figs and other dried foods, spices and crude vegetable oils, and cocoa beans, as a result of fungal contamination before and after harvest.
Several types of aflatoxins are produced in nature. Aflotoxin b1 is the most common in food and amongst the most potent genotoxic and carcinogenic aflatoxins. It is produced both by Aspergillus flavus and Aspergillus parasiticus. Aflatoxin M1 is a major metabolite of aflatoxin B1 in humans and animals, which may be present in milk from animals fed with Aflotoxin b1 contaminated feed.”

FACT Many kibble foods including those sold in vet surgeries have Maize and cereals as their main ingredients.
Your everyday vet is the last person to get nutritional and dietary advice from. They get a few hours teaching on nutrition during the whole of their veterinary training and it comes from one of manufacturers of the kibble that vets sell, so hardly unbiased. Holistic vets however are often very knowledgeable about nutrition and hence promote raw feeding.

There is a current campaign by the RCVS, led by one particular bigoted vet, to try to stop pet owners from being able to use choice, to use any alternative or complementary medicine, or treatment, as a first line or sole treatment for their pets and to stop them from raw feeding their dogs. This vet also has made it clear on social media that his end goal is to have all these things eventually banned.
The CAM community and Holistic and Homeopathic vets are fighting this all the way. Homeopathic and Holistic vets feel betrayed by their own professional organisation. They were not spoken to or consulted before the RCVS put out it’s statement. It is vets who prescribe homeopathy and have undergone additional training to be homeopathic vets. There are a group of holistic vets and CAM supporters walking from the Houses of Parliament to the RCVS headquarters on Monday 15th January to present an almost 15,000 signature petition to the RCVS demanding they retract their cleverly worded Statement, which, whilst not a ban, effectively stops homeopathic and other CAM vets from prescribing alternative treatments unless a traditional treatment is used alongside or before it can be used. Which defeats the reason people use CAM therapies.