What To Do About A Dog Called Red- Martina Hamburger 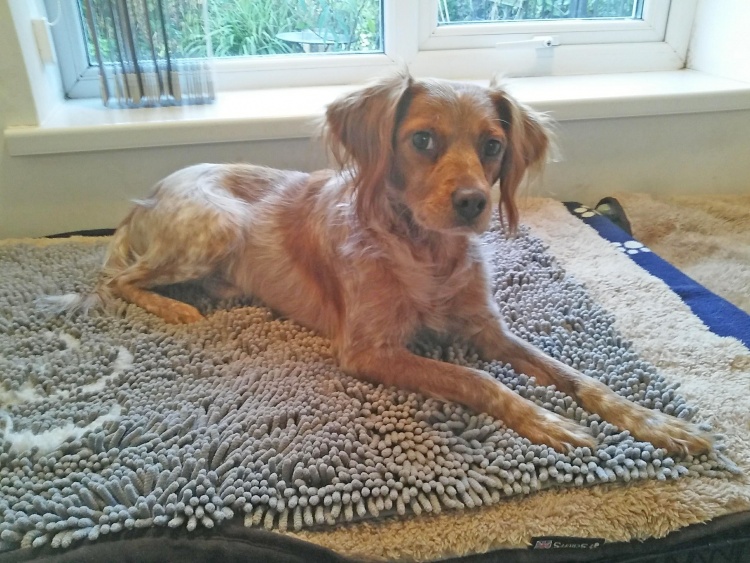 What to do with a dog called Red?

Red is a young, healthy Bretton Spaniel from Greece. Like so many, he was abandoned and had to fend for himself, running risk of being poisoned or run over. Unlike so many, Red had the good fortune to be picked up by a small local animal charity, Little Friends Lefkada.

Little Friends focus is on catch-neuter-return, they know that being from a semi island in Greece, only few of their rescues will find their way to adoptive homes in Europe or the UK. However, some do get a lucky break, usually because tourists in Lefkada fall in love with them, or because they are young, healthy and of a breed that is rarely otherwise available in the UK.

So, where’s the problem for Red? He should be on his forever sofa somewhere in the UK, having his belly rubbed, shouldn’t he?
Well, sadly, as part of his Mediterranean disease testing, Red has tested positive to Canine Leishmania.

Canine Leishmania is a blood parasite infection endemic in the Mediterranean. A high percentage of dogs from Greece, Spain or Italy will test positive to Leishmania, however, only a small percentage of those will go on to developing the disease.
The rest will have a strong enough immune system to fight the blood parasite without human intervention.

Unlike all the other Mediterranean diseases Leishmania is treatable but not curable. Infected and even sick dogs, can be treated and, if owned and cared for, they mostly live full and healthy lives.

Contrary to some of the outrageous misinformation out there, not the least from uninformed, scaremongering veterinarians, who are reluctant to operate outside their small comfort zone, Leishmania cannot be transmitted from dogs to humans (different strain of the disease), neither can it in the UK be transmitted from dog to dog (the vector, the sand fly, doesn’t exist in colder climates).

Allopurinol, the maintenance drug, is cheaply and easily available in the UK, should a dog go on to develop a Leish flare-up, the treatment drugs are available online. (Don’t ever source them via your vets, they have to apply for a special license and will charge the earth!)

So potential owners of Leishmania positive dogs have to do educate themselves (joining FB group Living with Leish is a great start), they have to liaise with their rescue, who if reputable will have a wealth of information) and they have to hand pick local veterinarians, who are willing to learn, and who will monitor their dogs’ bloods twice a year.
No doubt this makes owning a Leish positive dog more complicated and a little more expensive (I budget an extra £ 30 per month for my Leishmania setter), but surely the knowledge to have helped a dog, who so many would pass by, makes up for this? Surely the point of rescue is not to pick the ones everybody else wants, but those that really need a helping hand?

So back to little Red and Little Friends Lefkada, who’s choice a few months ago was to return him to the local rubbish heaps, to fend for himself, or to ship him to a foster home in the UK, so his forever family could find him and fall in love with this lovely, uncomplicated and affectionate little man.

Some might say that the former was the only way to go, the latter a really bad idea. I might have harboured such judgmental thoughts myself, had I not the benefit of having been to Lefkada and worked alongside the front line rescuers there. Had I not first-hand experience of having to lift a dog out of my car, putting him on the dirty, hard ground, with a last portion of food by his feet, and driving away, unable to contain my tears.

So Red is here, he’s a delight to his foster family and he’s waiting for his forever family to find him. And he is still waiting, three months later.

Not that there hasn’t been interest for our little man, not that potential adopters haven’t declared him ‘just perfect’ for their family. Until they heard about Leish. Until they were asked to go and research the disease, to get an independent opinion, because, unlike many small charities in the UK, who home foreign dogs, we always do tell our potential adopters not to just take our word for it. You see, if they did, it would make us doubt that they had what it takes to fully appreciate Leishmania, lack of vet support in this country and what it takes to keep their new family member safe.

A few days ago, hours before the scheduled appointment to meet Red, another family withdrew their application. Their local vet had told them that their children would catch Leish of the dog and that they were being irresponsible to even consider bringing him into their lives.

Marta , (Red’s rescuer), Sallie (his Greek foster mum), Christine (his UK foster mum) and I couldn’t do anything to help the situation. We had to accept that yet again Red’s chance of a happy ever after had disappeared.
We can educate people, we can point them towards informed sources, what we cannot do is make them believe the evidence before them.

So what’s next for Red? For all the other Leish positive dogs waiting for homes? Do we just throw them back out onto the rubbish dump and walk away?

To be honest, I don’t know the answer. And at this point in time, none of us can see any hope. We have decided not to bring any more Leish positive dogs into UK foster, which will bring our Greek foster support to breaking point. Then what?

And Red? Blissfully unaware he is spending tonight on a sofa, having his tummy tickled. He is for now loved and protected and he will, eventually, find his forever home. Sadly, by then his little heart will break a little, having grown much too settled with his foster family.

I am really struggling to end on a positive note, and unless we find Red’s family and change the perception of Leishmania in the UK, this struggle will continue.

React to this article:
1 Growl
12 Wags