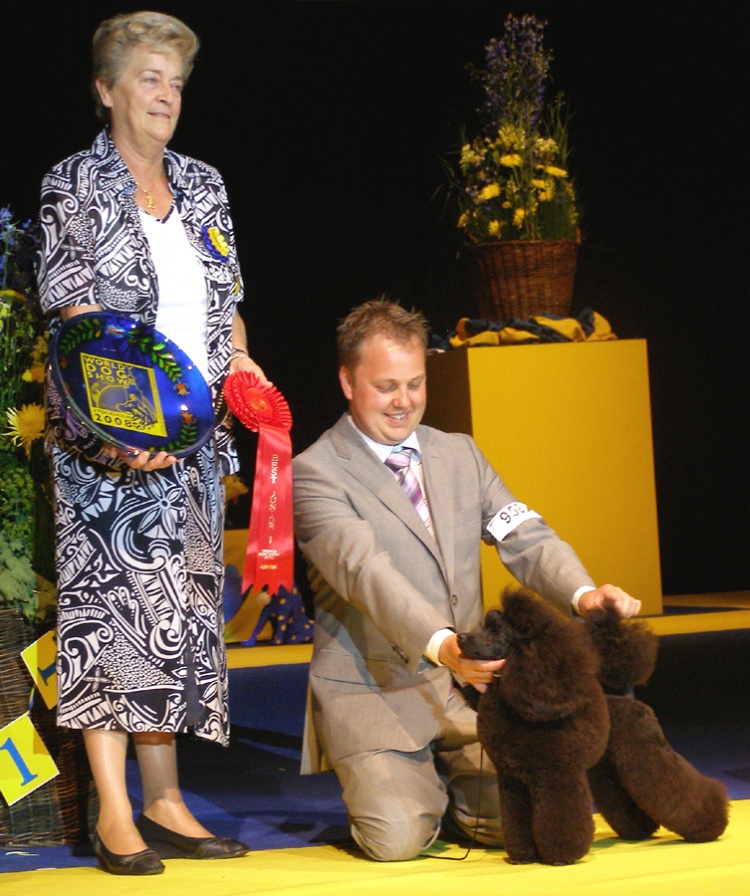 A dog show is just that - a competition where dogs are shown, in the hope of winning prizes.

In the dim and distant past the purpose behind a dog show was to be able to evaluate the results of your breeding programme against the efforts of others; to assess the virtues of a stud dog, and to see his progeny.

Those days are (some of us would say sadly) long gone.
Today it is all about having the most beautiful dog, prepared and handled to perfection. Exhibitors spend hours grooming their dogs - in some breeds it is a daily task, and the results can be stunning. Some people are talented hairdressers, and they can even make a dog with poor conformation look so good that many judges can't see past the glamour. Others do their best, but can never achieve quite the same finish.
So what should we do about it? Should we ban shampoos, conditioners, clippers and scissors? Of course not! Those of us who are not so talented in the grooming department just have to work harder - the old saying about only getting out what you put in is never more true than when discussing conditioning and grooming a show dog!

Having got our dog looking as good as possible we then have to take it in the ring. No matter how wonderful a specimen of the breed, if the dog won't perform it isn't going to win. Again, all of us are different. Some can show almost any dog and make it look like a champion, others can handle the best dog in the world and have it standing and performing like a no-hoper. We've all had the occasional dog that hates the show ring, and in my view the only thing worse that someone dragging a frightened or unwilling dog around the ring is the owner that resorts to drugging a dog on a regular basis, so that it 'behaves' for the judge.

Dogs are all different. Some love the atmosphere of the show ring and will happily perform no matter who is on the end of the lead. Others will show for their owner, but are reluctant with others. As already mentioned, some are nervous and just hate the whole experience, whilst there is a fourth group - those that are strong-minded and will show for one person but not another.
There are many reasons why a person does not show their own dogs. They may be hindered by ill-health or old age and not able to do the dog justice; there might be a show that they cannot get to - but would like to support the judge; they might just enjoy watching their dog from a distance because they do not feel comfortable in the ring themselves.


Sometimes they have to admit defeat and concede that they can't get the best out of that particular dog. This is where the expert handler comes into his own. Some dogs will show for the husband, but not the wife. Sometimes a junior can get on the same wavelength as the dog and get the best from it. Some use their undoubted talent to become professional handlers, taking on a variety of breeds and getting the best out of all of them.

It can be very frustrating when you have a good example of your breed, a dog that you have perhaps bred yourself, watched over carefully from puppyhood, pinned all your hopes on for future success, and when it is old enough to go in the show ring everything seems to go wrong.

We have witnessed this in our breed recently. A beautiful dog that just would not show for her owner. A bad experience with a heavy-handed judge at her first show made this youngster decide that she just wasn’t going to co-operate in future. Of course, things went from bad to worse. The owner went into the ring fearing that her dog would misbehave, so of course she did. It got to the point where the dog wouldn’t walk round the ring at all, and eventually the owner, on the verge of giving up completely, sought advice.
A change of handler has seen a complete reversal in the attitude of the dog - and consequently success in the show ring. It takes courage for an owner to admit that someone else can do better with their dog than they can. We all like to think that our dogs are devoted to us, and will be at their best when they are with us. However, sometimes that is the problem. They pick up on our moods, and particularly in a sensitive breed like mine, can start to convince themselves that there really is something to be worried about. A new handler, making the dog realise that showing is all about going to exciting new places and having fun, makes all the difference.

So what happens? Instead of celebrating the fact that a lovely dog, handled to perfection represents the breed in the group ring, a few jealous people whinge that it 'isn't fair'. They even talk about 'buying success' because a professional handler is involved. This surely is a huge slur on the integrity of those judges who have given this dog major awards?
In fact a pro handler will only take on a dog that they think has a chance of winning. It isn't worth their reputation to go in the ring with something that doesn't have a certain amount of quality.

When it comes to breed competition, of course we all want to win, but whichever dog goes forward to the group it is representing the breed as whole, and surely deserves the support of all the other exhibitors.

To those that feel that employing a handler ‘isn’t fair’ I suggest that instead of letting the green-eyed monster take over, they should go and breed better dogs, then improve their own presentation and handling skills so that they can take on the professionals at their own game.

React to this article:
1 Growl
41 Wags