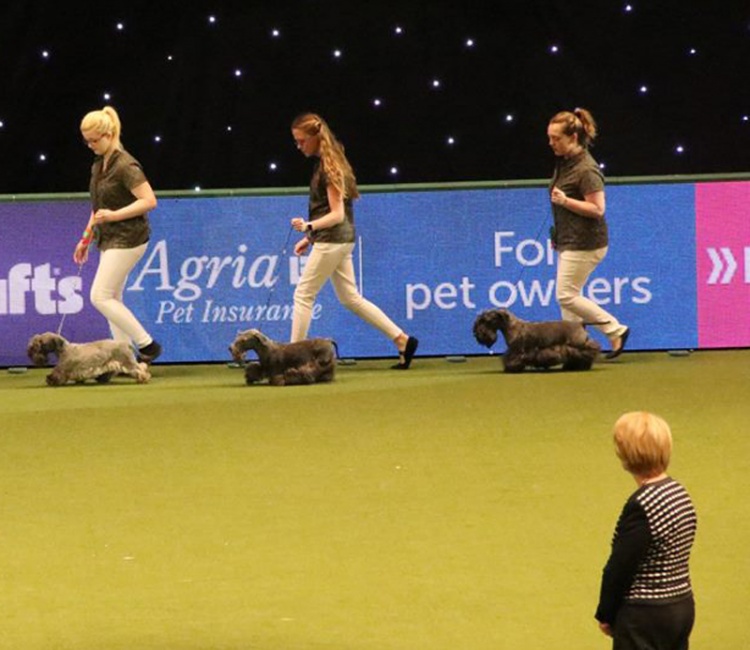 It can surely have come as no surprise that the Crufts Breeders’ Competition 2018 was oversubscribed. Although the idea of a breeders’ competition has been very slow to gain popularity in the UK it is regarded, rightly in my opinion, as one of the most prestigious classes held at shows in Scandinavia and anyone who has witnessed the huge entries at events such as the World Dog Show held recently in Germany cannot have failed to be impressed by the sight of so many teams filling the main ring.

Fielding a breeders’ team is an opportunity for a dedicated breeder to show the depth of quality in their kennel through the results of their breeding programme. It is a way of saying, “these are the dogs I bred, and I am proud of them”. It’s also a way of acknowledging the support of other owners who have chosen to buy from that kennel and have nurtured and trained the young pup so that it can fulfil its potential.

So what is the problem? Organising dogs and handlers can be difficult, and over the years the KC has tried various different formats for the competition, but the common complaint from show organisers was always that there was just not enough interest from the exhibitors to make it worthwhile. And yet when, after one year without a Crufts final and the seeming abandonment of the competition altogether, it was brought back last year as a stand-alone event, accepting the first sixty teams to enter on a first-come basis, it was over-subscribed within forty-eight hours. Maybe this says something? To me it indicated that there was a lot of enthusiasm for the idea of a breeders’ competition, but that those who wanted to enter couldn’t always guarantee that they could field a full team at every show – or even at enough shows to make their participation worthwhile.
The KC seems intent on making it difficult for both show organisers and for would-be exhibitors. In the past it was difficult for the show manager to estimate how long the competition would take. There might only be one team competing in a group – or even none at all – although in theory there could be twenty or more teams, occupying the ring for quite a considerable time. Making it a points based competition had its problems too. In some groups take up was so low that it was easy for a dedicated team to amass a huge number of points; in others every point was hard won. Then all those that had qualified for the final found themselves equal, and often the competition was won by a team that had entered a bare minimum of classes, just gaining sufficient points in order to qualify, whilst those that had slogged around the show circuit al year, ensuring that three or four dogs were available every time found themselves without any recognition for their efforts, beyond the feel good factor of appearing in the Crufts BIS ring. At many shows the competition seemed to be an afterthought, a minor inconvenience that could be slotted in at any time and in any available ring, so that many were the times when teams missed the class because some of their number were still being judged elsewhere.

Obviously, with a lack of support, it was inevitable that the competition would fizzle out, and lack of a sponsor and consequently a dearth of tangible rewards for the winners led to its demise. Was the KC surprised at the reaction? The sight of all those teams amassed in the BIS ring is pretty impressive. When you consider the chaos that ensued behind the scenes last year it was even more remarkable. Whoever thought that it was a good idea to bench nearly 250 dogs and their owners and supporters in one hall, move them all into another hall for pre-judging, back to their benches, then have them lined up for over an hour whilst the main ring programme overran – and all this on Saturday afternoon, the busiest period of the show – needed their head examining. Purely on health and safety grounds it was completely impossible, and consequently the pre-judging of the event took place in a hastily roped off corner of the atrium – much to the surprise of spectators who were unceremoniously moved out of the way whilst eating their lunches. Judge, stewards and competitors coped with equanimity but it was hardly a fitting way to conduct what should have been one of the show’s flagship events.

Will Crufts 2018 be any better? The competition has been moved to Friday, so there shouldn’t be as much pressure on space, and has been limited to just forty teams. It is an indication of the competition’s popularity that it took just over an hour for those forty places to be taken. It seems strange, to my way of thinking, when it was obviously so popular last year, to actually cut down on the number of places available rather than increasing them. Yes, this year the organisation was not up to the standard we have come to expect from Crufts – but shouldn’t that be reason to improve, rather than simply make things easier for the show organisers?

2018 sees the start of a new Breeders’ Competition, with generous sponsorship from the insurance company, Agria. Will that encourage breeders to field a team at shows throughout the year? I’m not altogether convinced. One very practical step is to say that only one member of the team need be entered in a class at the show, with the others being brought along simply for the competition. This not only cuts the cost for the exhibitor – four show entries plus an extra £15 for the Breeders’ Competition makes it quite expensive, especially if one or two of those dogs wouldn’t otherwise be shown. Sometimes breeders have dogs of high quality in pet homes, and heir owners are thrilled at the idea of taking part in a competition such as this – and who knows, a taste of success might actually encourage them to become regular exhibitors.

React to this article:
Growl
15 Wags