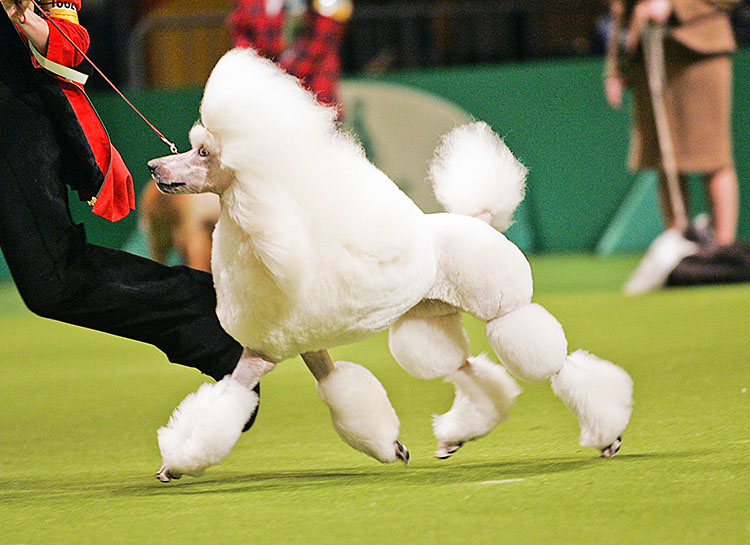 If you have never visited the Republic of Ireland you are missing a real treat, in the penultimate week of August the dog show circuit begins with a whirlwind, whistle-stop tour that has become popular with exhibitors from the UK as well as the natives of Eire. The Green Star award system as it stood before the Irish Kennel Club became part of the FCI was complicated and a bit of a nightmare. If your dog needed to win its final champion points with six other dogs being present it was possible for competitors to enter but not show their dog on the day, thus preventing your moment of glory. I recall one particular exhibitor hiding in the back of a van and waiting until the other exhibits were in the ring before bursting forth and galloping into the ring, the dog was duly made up into a Champion that day!

Now the system has altered and for a dog to be declared a Champion seven green stars from seven different judges, with at least one awarded after the age of 15 months, have to be won. Something that you should be aware of if you do intend to show in the Emerald Isle is a change to the UK Kennel Club's definition of Mid Limit and Limit classes here. The classification of Mid Limit has remained the same (For dogs which have not become show Champions under Kennel Club Regulations or under the rules of any governing body recognised by the KC, or won 5 or more First Prizes in all at Championship Shows in Mid Limit, Limit and Open classes, confined to the breed, whether restricted or not, at Shows where CCs were offered for the breed) but the addition of " or won 3 or more CC/CACIB/CAC/Green Stars" means that should you have a young dog and you do rather well at the Irish Shows you could find yourself only able to enter the Open class on this side of the water. The addition is the same for Limit, the rest of the classification remains the same.

On a positive note I'm glad the KC have finally clarified what has been viewed as a rather grey area but I do think that there may well be a reaction to this ruling when it becomes practice in January 2018.Whatever the decision on this perceived loophole was going to be there would always be someone left unhappy about the situation. However when Caroline Kisko, Kennel Club Secretary, said: "The SEC has noted that exhibits can have won three or more CCs, CACs, CACIBs or Green Stars without having qualified for a Champion title, whether they are resident in the UK or abroad. Therefore they were still able to qualify for Mid Limit and Limit classes giving them an unfair advantage over exhibitors whose dogs have been made Champions with the same number of awards. It is for this reason that these amendments have been brought in, to make these classes fairer for exhibitors" were the words "unfair advantage" well chosen? If the KC believe that their approved Judges are honest and appraise the dog on the day and as long as the exhibitor doesn't enter the ring festooned with previously won awards how exactly do they have an unfair advantage? Are the KC saying that the top awards always come from the Limit or Mid Limit classes, that's clearly not so, no sign of advantage there.

It is possible for a dog to have won three or more challenge certificates in the UK and not be awarded the title Champion or Show Champion, three CC's under three different Judges one of which to have been awarded after the dog reached 12 months of age is the ruling and certainly in some early maturing breeds CC's are often awarded to youngsters. In the ROI where the numbers of dogs competing is smaller, even in the slow maturing breeds a Judge may award a Green Star on the day, perhaps to the only dog entered, mindful that his award is only part of the journey to being a Champion for that dog. You might be forgiven for thinking fewer dogs to beat makes for a cheap champion but remember in the UK for breeds with smaller numbers they only need three people to hand over the green and white card, in ROI it takes seven such awards. For instance at a recent ROI Championship show, breeds that in the UK would have commanded entries of three figures a few years ago, barely scrape into two, i.e. Cocker Spaniels 26, Beagles 1, Dalmatians 6 and Rhodesian Ridgebacks 1.

With the numbers of exhibits tumbling at UK shows I would suggest we are not far behind.

The Judge may, of course, withhold but that in reality is not common and I feel the Judge who habitually withheld the Green star would find his diary very empty indeed; such is the power of the exhibitor in Eire. The IKC responded to an outcry of dismay from exhibitors when the classes available at Championship shows meant that young dogs were penalised. The classes were Puppy, Junior, Intermediate (between 15-24 months), Open (over 15 months) followed by the Champion and Veteran. What would you do with a 25 month old, slow maturing breed, would there really be any point in entering that gangly youth straight into the Open class? After a little head scratching a new class was added, Adult for dogs between 24 and 36 months of age. Sensible solution, quickly executed. There have to be rules and regulations, we all understand that but with the dog show scene changing so rapidly our own Kennel Club need to respond faster. The Judges Education scheme is welcomed in the most part but it leaves untouched the inherent cronyism that blights the sport, it almost encourages the continuation of the divide. Show societies are trying their level best to entice exhibitors, I would feel more confident in the KC if they also recognised the value of each and every exhibitor, there's little point in a tribe of chiefs and no Indians.

React to this article:
Growl
13 Wags