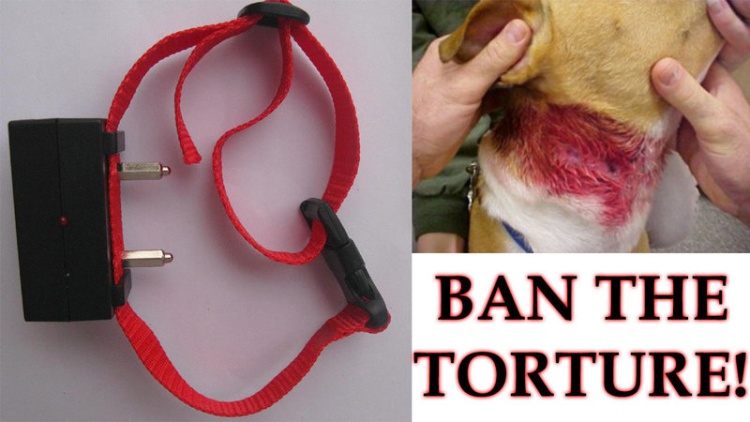 Imagine…
You’re caught short out travelling , not a services or garage in sight. You pull into a layby , hop over the hedge while keeping a look out for perverts and Bulls and lower your under gunders in preparation to relieve your bladder.

Then…WALLOP! Out of nowhere an electric shock zaps you at the throat . All in all that would be less than convenient and I’m sure that once you had dried your shoes you would have been outraged at such a shocking experience.

Well ,get this people… Official code of practice of the Electronic Collar Manufacturers Association, which has lobbied Scottish Government against a ban on these cruel devices, claims they are ‘designed to manage’ dogs soiling in public

I’m sorry, I must have misread this surely? The manufacturers are seriously suggesting that by shocking a dog when he needs to relieve himself naturally is a positive move towards cleanliness on the streets?

Maurice Gordon MSP for west Scotland is behind the debate with electric collars as its focus he said “Electric shock collars are harmful and have no place in modern dog training. The advice from academia, dog behaviourists and trainers is clear – electrocuting dogs does not help train them. It is particularly alarming that the trade body for manufacturers of these devices, the ECMA, state that dogs going to the toilet is one of the behaviours shock collars are designed to manage.

The Scottish Government plans to create a new regulatory regime to allow continued use of these harmful devices. Sadly, the proposed regulatory regime will only create unnecessary bureaucracy and do little to prevent dogs from being harmed.

The simplest solutions are often the best. That is why I’m calling on the Scottish Government to ban electric shock collars once and for all. It’s time to do more to protect dog welfare in Scotland.”

Research published by the Department of Environment, Food and Rural Affairs (Defra) in England concluded that the use of electric shock collars as a training method has a long term negative welfare impact on dogs. Furthermore, an independent survey commissioned by the Kennel Club found that 73 per cent of the Scottish public are against the use of electric shock collars and 74 per cent would support the Scottish government in introducing a ban on their use.

Despite the huge volume of evidence reinforcing the need for a ban on electric shock collars and support for the campaign across the welfare and veterinary sectors, the Scottish Government has intentions to merely regulate the sale and use of electric training devices rather than implementing a ban.

The proposed regulations would include a new qualification for up to 100 dog trainers across the country to enable them to promote and use shock collars on dogs.
Oh well that’s ok then , people ALWAYS follow instructions , don’t they?

Caroline Kisko for the Kennel Club has come out strongly in favour of a complete ban, she said “The ECMA’s code of practice advocates the use of electric shock collars to try and stop dogs from going to the toilet. A dog relieving itself is a natural behaviour, and stopping it from doing so by shocking it with an electronic collar is not only barbaric and lazy but could well be against the law. A dog is certainly not going to be able to stop itself from going to the toilet and using shock collars to attempt to do this is likely to be counterproductive and cause other issues.

“The fact that the ECMA continues to promote this use of such collars, against the guidance of dog welfare organisations, vets, dog trainers and behaviourists throws doubt on the validity of the rest of their code of practice. We know that the Scottish Government has met with the ECMA a number of times to discuss possibly regulating the use of these collars, rather than banning them outright, and we would be truly horrified if an organisation that believes it is okay to harm a dog to stop it from exhibiting a natural behaviour pattern could influence the Government on their decision.”

If you would like to see for yourself the ECMA ‘s Code of Practice and I use the word Code loosely then visit :http://ecma.eu.com/wp-content/uploads/2016/10/Electronic_Collar_Code_of_Practice.pdf

I know full well that there is a lobby for using shock collars appropriately and in La la Land I’m sure the sun would shine every day on those times when “appropriate use” was warranted but as we know humans are stupid and unreliable, they are short tempered and easily misled. Sounds like we have taken a giant leap back into the dark ages, what next the rounding up of black cats and bricking them up in the faux chimneys of new builds?

And this is how quickly things change when you make a noise...
The use of electric shock collars on dogs is to be effectively banned in Scotland, the Scottish government has confirmed.

Ministers said in November that they would continue to allow the use of the training devices.

That was despite animal welfare charities warning that the collars can cause unnecessary suffering.

Environment Secretary Roseanna Cunningham has now announced that the government will go further.


The move follows a campaign by MSPs including Scottish Conservative Maurice Golden and the SNP's Ben Macpherson, as well as animal charities including the Kennel Club, the Scottish SPCA and the Dogs Trust.

Electric collars are used to train animals with behavioural problems - but campaigners argue that they are cruel, and have questioned their effectiveness as training aids.
'Completely unacceptable'

Ms Cunningham said she had made the decision after listening to the concerns that had been raised - particularly over the ready availability on the internet of cheap devices which can be bought by anyone and used to deliver painful electric shocks.

She added: "I have decided to take steps to effectively and promptly ban their use in Scotland.

"Causing pain to dogs by inappropriate training methods is clearly completely unacceptable and I want there to be no doubt that painful or unpleasant training for dogs will not be tolerated".
Image copyright Getty Images
Image caption The collars allow dog owners to deliver an electric shock to

Ms Cunningham said she would work with the authorities to ensure that "anyone found causing pain to dogs through the use of collars or other devices can be prosecuted as they deserve".

She confirmed: "I will therefore be issuing strong ministerial guidance on the use of all painful training devices for courts to take into consideration in any cases brought before them regarding unnecessary suffering through the use of these devices."

Initial draft guidance has already been published, with the ban to be introduced through guidance issued under the Animal Health and Welfare (Scotland) Act 2006 in the coming months.

Draft guidance states that: "Causing unnecessary suffering is an offence under the Animal Health and Welfare (Scotland) Act 2006. This includes suffering caused by inappropriate training methods."

Once the guidance has been finalised, the courts will be able to take it into account when establishing liability in a prosecution.


The government said in November that it would tighten the restrictions around the use of electronic dog training collars, but their use would still have been possible under supervision.

It also said it was working with trainers to develop a recognised qualification for those who wished to continue using the collars in a "controlled, responsible way" to help train dogs.

But Ms Cunningham said that the proposed qualification would not now be created.

The collars are already banned in Wales, but remain in use in England.

The Scottish Parliament had been due to debate the use of electric shock collars on Thursday afternoon, with opposition parties expected to unite in calling for a ban to be introduced.

The debate was to have been led by Mr Golden, with a petition backing the call attracting about 20,000 signatures by Wednesday afternoon.

Ms Cunningham's announcement on Wednesday was welcomed by campaigners and politicians from all parties.

Mr Mr Golden said he was "very pleased the Scottish government is finally announcing a ban on the use of electric shock collars for dogs, that they have listened to our campaign, and to the 20,000 people who signed my petition."

React to this article:
1 Growl
13 Wags