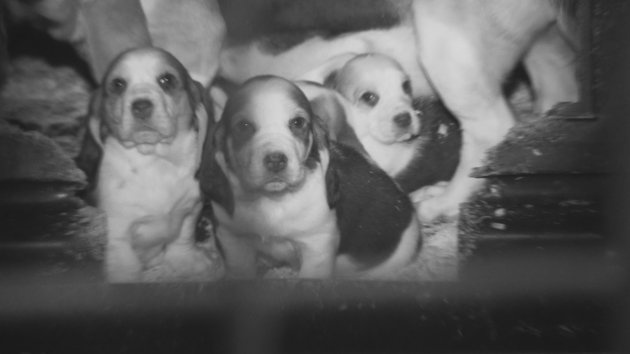 She hit the ground running, as she burst through the bracken onto the rutted lane that ran across her path she hesitated for just a heartbeat. Habit told her to turn right, that was the way she and Dyllis always ran. Their walks with Geoff and Stella, all through the seasons, their scent strong in the air. Clarice ranged with her nose and knew that Dyllis had turned left; she lowered her head and ran into the gathering darkness. Clarice arrived onto an apron of asphalt, the smell of oil and rubber was strong here.
Clarice dropped her nose to the ground and slunk down onto her shoulders, questing and searching…There it was…in the corner of the car park the pictures spun into her head of Dyllis, a tiny drop of urine shone like a beacon to Clarice as she turned and scented the wind trying to find the slender ribbon of scent that would lead to Dyllis.
She heard Geoff and Stella running down the muddy lane calling her name.
She swung her head around to the north and ran full tilt across the tarmac toward the faint message in the wind. She didn’t hear the Range Rover as it came from the right; she didn’t see the horrified face of the woman behind the wheel as she stamped on the brakes.
It just suddenly went black, which was strange when there was so much light up ahead.

The night had been cold; the film of water in the bottom of the filthy margarine container in the bottom of the crate had frozen. Dyllis tried to lick the surface but it was useless, she was so thirsty. She looked around in the harsh blue white light of the morning at the other dogs around her. Most were curled tight into self protecting balls, shutting their eyes and thoughts to the world. It seemed all of the dogs were around the same size as her; there was a faint rattling as dogs trembled against the wire in cold or fear or both. The smell was like nothing Dyllis had experienced before; it was the smell of fear and of despair. Dyllis whined as she realised she had a full bladder and wanted, no, needed to go out. She had never soiled indoors once she had learned as a puppy that outside was the place to relieve the pressure, there had been a special place set aside for Clarice and Dyllis, a round area of pea shingle that both girls trotted out to as regular as clockwork and even when they went away on holidays Geoff or Stella made sure the girls knew when it was right to empty their bellies. Neither Geoff nor Stella were there, Dyllis pawed at the crate door and whined. As the hours passed Dyllis began to be more and more uncomfortable, she got to her feet several times and then tried to settle back down on the thin covering of straw. She arched her back and shivered as she tried to hold the urine inside . She could not hold out any longer and squatted as a dark puddle formed around her feet and soaked the already damp straw. The small grey dog in the cage with her barely moved as the liquid crept beneath her body.
Time passed, Dyllis tried to sleep, tried to ignore her pounding heart and the smells which made her eyes water. As the wintery sun was sinking, they heard a vehicle pull up outside the barn doors. A figure slipped through between the glare of the headlights and dumped a sack of something close to Dyllis’s crate. The room erupted into squealing and high pitched barking, the noise of dogs throwing themselves at the sides of their crates and pounding on the floor made Dyllis disorientated and terrified.
The man ripped the top from the sack and plunged a saucepan into the contents, one by one, he hurled dried food into the top of the crates where it rained down on the dogs beneath, there was silence again mixed with grumbles as the starving dogs accepted the feast of sour tasting nuggets. Dyllis sniffed at one of the nuggets, no, she could never be hungry enough to eat that! Her kennel mate hoovered up the fallen pieces, no matter where they fell. The door of the barn slammed and the dogs were left in silence again.

Geoff and Stella heard the impact, Stella screamed “Nooooooooo” but nothing could reverse that moment.
The lights of the Range Rover made the still body of Clarice centre stage as the snow drifted down like a prayer.
Geoff fell to the ground beside the body of his beloved dog, “Oh My God….nooo..It should never happen like this “he sobbed. Stella knelt beside him and felt for a pulse under Clarice’s twisted leg. “She’s still with us!”


The driver ran forward, her makeup streaked down her face, her eyes staring out from the smudge of mascara. “Let me get her to a Vet, please, let me get her to a Vet” she held her gloved hand to her mouth “I didn’t see her…I couldn’t see her …I...let me get her to a Vet”.
Geoff nodded and lifted the unconscious Shepherd in his arms, the snow began to whirl around their bodies as they placed Clarice into the boot of the car, and Geoff jumped up beside her.
His eyes met with Stella’s, “I’ll travel here, I won’t leave her alone, just get us to a Vet”. The rear door slammed shut and the lights disappeared into the dancing snow that continued to fall.

Another night of cold and pain.
Someone had come back before nightfall and used a watering can with water that tasted of rotting leaves to fill the bowls in the crates. Two of the crates had been carried out of the barn and loaded onto a vehicle. They had puppies in them, they had looked very still, they were alive but the sickly smell of bloody diarrhoea had reached into every corner of the barn and it still clung to the dog’s coats as they lay flat against the floor.
Early morning this time when two men kicked the barn doors open and let light stream across the sorry battalion of cages. Dogs sat, heads lowered and blinking into the light, not seeking eye contact but waiting for a move that would result in pain.
One man with a woollen hat pulled down over his ears walked amongst the crates making notes in a small book as he went. He paused at the crate holding Dyllis, nodded, wrote something and moved on.
The other man stood with his hands in his pockets against the light.
The writer suddenly smiled “Ok, I tell you what I do; I make a good deal for you, yes?” His voice had a strange quality to it; it was high and although he smiled there was no smile in his words.
The man by the door just grunted and said “Let’s hear it”. The smiler pointed at several cages including Dyllis’s. “I take those, they could be good breeding stock and I make you a good offer of two hundred”
The door man, shook his head “I can get more than that each on Gumtree”
Smiler shrugged “You are a brave man my friend, I would say you may be too greedy “ he shrugged again “I take the risk that these are no good for breeding and the risk of moving them while they are still hot, take the money…the rest you can sell as mongrel Christmas presents for little kids, your choice”
The Doorman held out his hand , spat on the palm and held it out again, Smiler briefly shook it .

React to this article:
1 Growl
5 Wags