A Christmas Tale : In Four Parts 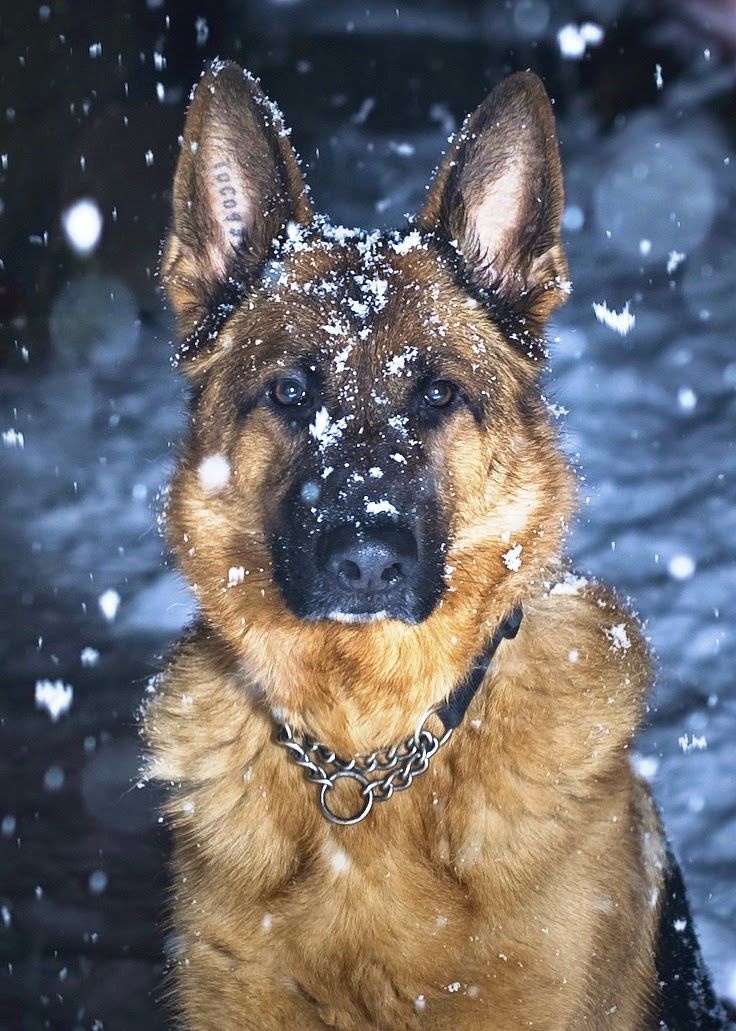 A Christmas Tale: In Four Parts

It was snowing, large flakes drifted down and fell on the upturned noses of first Clarice the rangy German Shepherd and then onto Dyllis, the Boston Terrier as they stood at the end of their garden and gazed into the leaden sky. Dyllis sneezed and lost her footing on the frozen patio, she suddenly sat down with a grunt as Clarice waggled her eyebrows in amusement. It was nearly dark now, just the lights from the house on the white pathway in golden, glistening pools. Something tasty was wafted on the air as Dyllis scrambled to her feet. She trotted over to the tall gate in the corner of the garden and snorted as she caught the unmistakable smell of cooked liver.
The gate was open, Dyliss had never seen this gate open before and she peered into the darkness, her nose twitching. Carefully she eased her way through the gap towards the luscious scent of her favourite treat, as she lowered her head to eat the scattered liver she noticed a movement to her side but carried on eating, enchanted by this unexpected gift. Suddenly a blanket was thrown over her and she was lifted into the air by strong hands, she squealed with surprise and tried to bark and wriggle free but she was held tight.
She heard Clarice shout a warning and heard the Shepherd’s heavy body slam against the now closed gate, the sounds of Clarice’s high pitched barking became more faint as she was bundled onto a hard surface that smelled of pungent petrol , an engine started and she rolled out of the blanket and yelled at the top of her voice. The van drove quickly out onto the main road with Dyllis frantically scratching at the bars on the small cage she had been thrown into.

Clarice threw herself again and again at the closed solid gate; she barked continuously and dug at the base of the gate until her nails were bleeding. The back door to the house opened and Geoff followed by his wife Stella came out onto the newly fallen snow “What on earth is the matter with her?” came Geoff’s voice. “I don’t know, but I’ve never seen her like that before “answered Stella as they made their way to where Clarice was now whining and barking frenetically at the gate. As Geoff grasped her collar and tried to lead her way Clarice threw herself backwards to escape his hand and returned to high pitched barking at the gate. Stella was still fiddling with the torch and as light spilled from the end she looked around quickly “Where’s Dyllis? Geoff…Dyllis has gone!”


“She can’t have gone far, come on Clarice you’re just being stubborn” again Geoff tried to pull her away, this time Clarice pulled backwards out of her collar and ran the two steps to the fence beside the gate.
She crouched and with an almighty spring she stretched her neck as her forefeet made contact with the top of the wood.
Her hind feet dug into the panelling as she boosted herself up and over the edge and dropped onto the woodland on the other side.

The van had stopped, they had only been travelling a short time but to Dyllis it felt like hours.
Dyllis had been brought up to respect humans and other dogs and although she was terrified she didn’t bite when she was roughly pulled from the crate and carried into farm buildings that stood black and menacing against the settled snow. There were two men; their smell was sour and their voices harsh. One of them clicked on a torch and shone it into the gloom. Row upon row of cages, each with eyes reflecting the light silently stared out at Dyllis and the men. One small grey dog whined and then fell back to the rear of the cage as the man’s boot crashed against the side and sent the crate spinning.”Shuddup!” He wrenched the top of the crate open and dropped Dyllis in beside the cowering dog.
The man shone the torch around the cages and all the dogs fell away from the light as if burned. “Come on, we’ll sort this lot out tomorrow, looks like we’ll be havin’ a good Christmas “ .
The door to the barn was slammed shut , the van lights briefly shone across the doors and the van turned into the night.In the eerie silence one by one the dogs began to howl. Their misery rising into the night in waves of sound as the snow continued to fall…