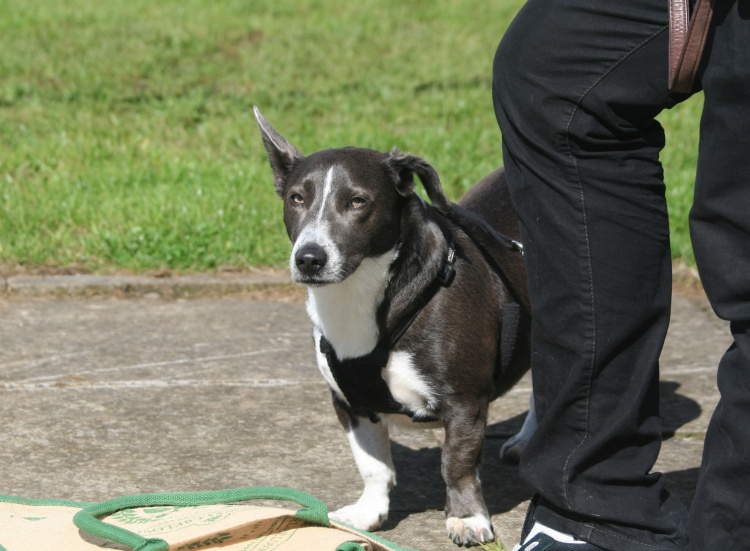 The pious among you may get to your feet, for the rest of us heathen brethren we can sleep soundly in our beds with the whisper from The Kennel Club that finally their Code of Conduct is about to become the governing document it was originally expected to be.

It is a terrible shame that we need to instruct people on how their actions and words can be abusive but there is no doubt that the level of astonishingly poor behaviour which includes intimidation and verbal abuse has risen in and around the show ring to unbearable levels and people are leaving the show world in their droves! Why on earth would they put themselves in the line of fire week after week when they could actually have quiet enjoyment of their dogs by not attending?
Dog showing is not intended to be for the Teflon coated with Kevlar armour, and yet the bully boy tactics have been working, the opposition are staying at home. It used to be a joke that a “knife in the back” was expected if one became either controversial or successful but frankly even a cowardly blade between the shoulder blades would at least be an honest and passionate action. The incessant gnawing away at the integrity of the structure that is based on a hobby by those who have no respect for other’s feelings or any kind of appreciation of consequence is destructive to any group but to dog showing it could so easily be the death knell.
The existing code of conduct does cover many areas, but realistically the KC can only really police at an event that is run under their rules or act where there is an association with one of their “services”. So while there will still be “guidance” for social media use the existing law of the land covering libel and social harassment will have to do for that very fertile environment for those who would undermine and destroy. There’s the rub, in my own opinion, social media has offered a platform to the individual who is destructively manipulative because while the old adage of ‘sticks and stones may break my bones but words will never hurt me’ may have held true in a confrontation or gossip that was restricted by geography the introduction of far reaching libellous comments by a watchful arachnid in it’s web of lies can damage in an insidious and long lasting way.


At an event the pot is stirred but the bully chooses his or her targets well and is confident that their cankerous poison will not lead to confrontation. Unless of course they go too far, I’m sure most of us have in recent years seen bursts of temper where second place prize cards have been torn up in a manner sure to cause interest, on one occasion I remember seeing an exhibitor ripping apart their Reserve CC card! In these cases I would urge those in your breed who are as appalled at this show of aggression to come together and report the individual.
I think most of us who have been part of the show scene for many years will at this point, sigh and ask if The Kennel Club will actually do anything about it. The answer is, if they have any clue as to the effect these individuals and their cohorts are having on the world of dogs, they have to act and act with vigour. Certainly the track record for the KC attending to reports of harsh handling, abusive remarks and confrontations at dog shows has been, to put it mildly, underwhelming. With signed affidavits and video proof in some instances the reaction has been a polite letter and an assurance that the person accused has been warned as to their conduct. Really? If that worked we wouldn’t see repeat offenders and yet there they are. Here’s the thing about a society like ours, it is dynamic and it changes, sometimes the movements are subtle but if the normal mores of that society driven by individuals who believe they are beyond any law are changed by example the following pressure of numbers of those wishing to conform to the new regime alters the structure itself and the warped model is then in place and the former status quo is unrecoverable.
The code of conduct also highlights rules already in place in the “big and getting bigger red book”, outside attraction for instance and that “Sparring between dogs is discouraged”.
At a recent Championship show my breed’s ring was beside a ring of English Bull Terriers. While the male EBT’s were being shown the reflected noise in the enclosed space was far in excess of what would be tolerable in any working environment. Did the Judge or Stewards ask for the exhibitors to calm their dogs, or ask them not to encourage sparring? They did not and when approached a representative of the committee said “Oh, they always do that”. Who is at fault here, the owner of the dog, the steward, the Judge, the committee or me for not wearing ear defenders and training my terrier not to be intimidated by overwhelming and aggressive barking?
It is time that the Kennel Club squared up to this threat to the world of dogs in general and the show world in particular. I applaud their efforts to encourage new exhibitors, I cheer them on for their changes to the show structure to make it a lifetime’s hobby but all this will fail without a clear and decisive zero tolerance for this plague of trolls. Fine them, ban them , refuse their applications for registration , whatever punishment fits the crime but make no mistake, thinking a stern word will have the desired effect is ineffective and is tantamount to urinating against a force 9 gale.