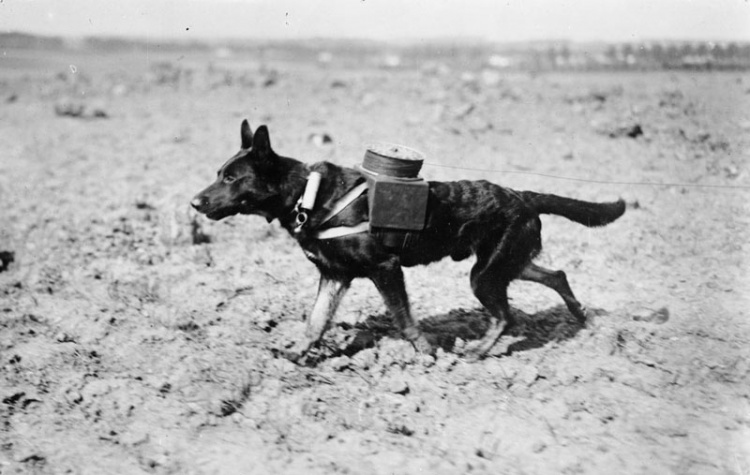 Lest we forget… as the clock strikes the eleventh hour on the eleventh day of the eleventh month our thoughts go to those who fought in the many wars that have shaped our world.

For me the most poignant figures of loss through both world wars were the animals that fought alongside the soldiers, airman and sailors. The human cost of the First World War was astounding, 230 soldiers died for every hour of the four and a half years the war raged, the number of animals killed cannot be accurately measured but it is estimated that 7,500 dogs were killed in action from 1914 to 1918.
It was clear at the beginning of the Great War that animals would have a part to play, horses were the main transport and thousands of horses were shipped to the continent to be used to carry and cart. In the terrible conditions of the trenches it was realised that a dog would be the ideal messenger, a smaller target than a man and frankly, more expendable. At first Lt Col Edwin Richardson set up the war dog training school in Shoeburyness, within months he had exhausted his supply of dogs and the call went out to Battersea Dog’s Home to help provide animals for the war effort. The Airedale was the most popular of dogs to train, this bright, intelligent breed could run as a messenger , he could guard and he could carry supplies but as the war continued Richardson was forced to take on many different breeds including one he christened the Summer Dog, because it was “summer this “ and “summer that”!
These cross breeds became the backbone of this terrible war of attrition. The renewed drive for more men at the front and the call up procedure left munitions factories unguarded and again, suitable dogs were pulled from Battersea, Liverpool, Manchester and Birmingham Dogs Homes to take the place of the men. Dogs were used as Ambulance dogs, pulling their precious loads through the deep mud to safety and even the terriers were useful in the ghastly maze of the trenches keeping the rat population under control and bringing comfort to the troops, raising their spirits and giving perhaps the first warm contact of unconditional companionship that these men had enjoyed in many months of fighting. It was considered a serious offence to interfere with a messenger dog on a mission, identified by a metal canister around the neck and a coloured tallie on his collar, dogs of all kinds ran through deadly fire to deliver their messages. Still more dogs were needed, the War Office commanded the Police Forces throughout the UK to send strays directly to the War Dog Training School and the public were told that their dogs were needed by the war effort, many gave up their dogs to the training school, the extreme rationing was taking it’s toll and the spectre of starvation was at the door of all echelons of society. It is very moving that as these dogs poured in from all sorts of homes they were often accompanied by notes and letters about these loved pets, one lady wrote "I have given my husband and my sons, and now that he too is required, I give my dog.”


There are so many stories of valour by dogs during the conflict; the story of Dick, a black Labrador cross shows the stoic nature of our dogs through the ages. Dick was wounded while serving in the Villers Bretonneux sector in Picardie, where British and Australian Soldiers fought side by side. Dick was evacuated to a field hospital and was sent back to the line a short time later to carry on with his work delivering messages. After a few days Dick grew weaker and he began to limp and finally the decision was made to save him from further suffering and he was put to sleep. A post mortem examination showed Dick had a bullet lodged in his chest and a shell splinter lying close to his spine. He had gone on as long as he could without a whimper and his courage was never in doubt.

In the years between the wars the dog’s role in combat was re evaluated and Germany began in earnest to train dogs for military use, by 1935 they had trained over 200,000 dogs .In the UK we were looking at the possibilities of guide dogs and sniffer dogs. When war with Germany seemed certain it was said that the use of dogs in War was outdated and this time thousands of terrified owners had their pets put down, again Lt Col Richardson convinced the War Office that their was a role for dogs to play, not just as sentry dogs but they could detect the new non metallic mines that were being used in North Africa and save hundreds of lives. Again the call went out for strays to be trained for the war against Germany. The most infamous vegetarian in history, Adolf Hitler was very much an animal lover and had several dogs, dogs were given to him as gifts but he also sought out dogs who needed a home. Amongst his favourites were Blondi and Bella, both German Shepherd Dogs and a small scruffy terrier who had found his way from the British lines into the German trenches, this scrap of a dog he called Fox. In the last days of Hitler’s leadership Blondi was with her master in the bunker in Berlin, Hitler shot her dead moments before he turned the gun on himself. Back in England such was the anti German feeling during this time that any breed who had Germanic associations was shunned or in some cases stoned and killed, the Dachshund was renamed the Liberty dog in an attempt to protect him but many were turned out onto the streets .Meanwhile the Russian and Soviet forces were using their stray dog population to destroy tanks. Explosives were strapped to the hapless hound and he was sent in close to the tank, the explosive detonated on contact and although successful as far as the destruction of the machine was concerned, the dog was killed and joined the “casualty of war” list. Over 40,000 dogs were deployed between 1941 and 1942 by the Russian forces, few came back.

So, please take a moment this Armistice Day to think of those extraordinary dogs who gave their all for their country in the many wars, thousands of dogs lives have been lost from Afghanistan to Korea wherever man has fought, his dog has been beside him. We have used dogs for our own ends through the centuries, we continue to exploit them, perhaps our means are now more subtle but by breeding carelessly too many dogs and not researching the homes to which we sell them, the end result of a bullet during a war or a blue injection now is the same, it is the dog that pays the price.

React to this article:
Growl
13 Wags