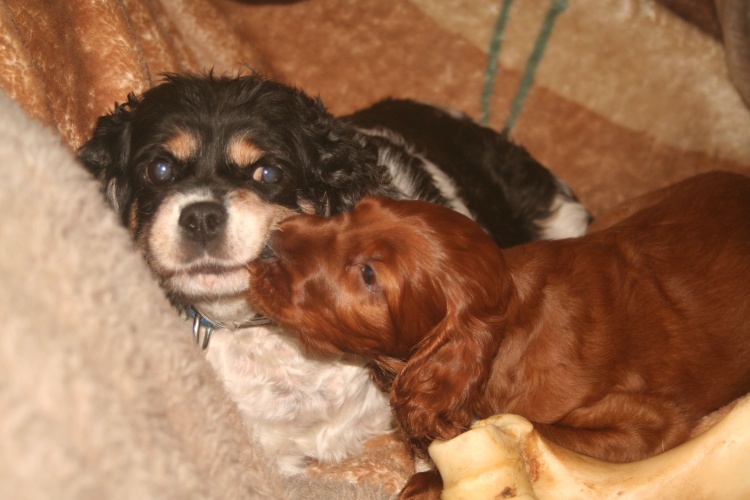 I wouldn’t presume to teach my Grandmother to suck eggs, mainly because I can’t imagine why one would wish to suck eggs but also because my Grand’Mere has been residing in Blackheath Cemetery for some years but, should I ever get the urge, it would perhaps be a reminder as to the very best method of egg sucking as opposed to an Egg Sucking for Idiots approach. Because no matter how well we are accustomed to a modus operandi there are times when a moment’s thoughtlessness can land you in hotter water than any hard boiled egg could survive.
I’d like to take a look at Judging at both ends of the age scale, the dog’s age that is, not callow youth to geriatric dodderer in the case of those who Judge, I’ll save that for another day!
Different breeds of dog certainly mature physically at varying times, mentally too there are variations. Some breeds appear to have a youthful aspect all of their lives, that’s the polite way of saying some breeds will be fizzy heads for years and then just as they begin to settle and become the dog you wanted, it’s time for them to leave. If you have studied the breed you are Judging you take this into consideration as well as the age restrictions on each class. A Minor Puppy (6-9 months) is a baby animal , just 24 weeks ago the puppy standing in front of you ready to be examined was coming into the world.
It has taken 24 weeks for that puppy on a phenomenal learning curve to co ordinate his movements, to understand his humans and to have the confidence to stand in an environment that offers no safe smells or sights apart from the human on the end of the lead. Over the next weeks that Puppy will, if he receives solid encouragement with no harsh handling, grow in his ability but at heart and in his head he is still not just classed as a puppy, he IS a puppy until another 28 weeks have passed. To sustain a lengthy show career a puppy is nurtured into a performance in the ring that is balanced by the dog’s pleasure, his need to please and his confidence that he is safe and will be free from harm. There are elements that can shatter that confidence, whether it is an attack by another dog, a crate being collapsed behind the dog at a crucial moment or, worst of all, the actions of a thoughtless Judge. The greatest gifts we can give any sentient being is one of patience and time , yes I know the pace of Judging dogs should be at just a couple of minutes per dog but come on, this is a young, impressionable animal , you should take time to give the dog and owner a good experience. The fact that for a Championship show the owner has parted with a considerable amount of money when all is added up should ensure that you, as a Judge, should do your utmost to be fair, fair to the exhibitor and fair to the dog. For me the Joie de vivre of a youngster learning to enjoy the show environment is charming, infuriating and necessary. Who wants an automaton, when you can have a happy healthy puppy who exhibits with verve and panache?

I know there has to be a balance, it’s no good a pup being so wiggly the judge is trying to catch an eel but as most experienced Judges know, give the dog a spin around the ring to get the tickle out of his toes and chances are you will get hands on easily. When a pup is nervous and worried the same mantra “take your time” is needed, be kind, know that the owner is wishing the ground would open up and swallow them! Judges who rush in too quickly when any dog is being asked to drop into stance is another cardinal sin. Watch the dog’s ribs, wait for that lift as the dog relaxes and sighs and don’t, as a Judge did to one of my dogs just recently, grab the nose to view the bite!


When the youngsters move, watch every step, even if the dog is behaving like a whirling dervish or a kangaroo because all you need is three or four straight steps to evaluate but even better if you just give that extra time, (without an impatient grunt) to allow the dog and handler to get it together and show you what they can do.
These precious minutes can make or break a dog’s future, not just in the show ring but it it’s acceptance of humans in any social gathering.
I recently had to lodge a formal complaint on harsh handling at a show; it is worth remembering that as the complaint is of this nature there is no requirement to pay the usual fee to lodge that complaint, however the report must be written on the day. The show secretary has a duty to pass this kind of complaint onto the Kennel Club for them to deal with. It is no reflection upon the show as they have a contract with the Judge that the Judge will behave in an acceptable manner.
Veterans also require extra care on handling, don’t force limbs into uncomfortable positions, all mammal’s joints deteriorate, strides shorten, so as an exhibitor take account of the changing needs of your Veteran show dogs and please, don’t leave it too long before retiring the old bloke or lady from the ring, better a year too early than a year too late.

Whatever Happened to Kindness?

Lastly a word about respect and kindness. As a Judge you should consider your appointment as an honour, whether it is a companion show or Crufts. People have put their money and faith in the result of your opinion, they have also entered their dogs expecting that you will show kindness and appropriate handling to their dog, it is sad that allegations and formal complaints of rough handling by Judges still appear on the Kennel Club desk. What I find even more extraordinary is that the Kennel Club are still in the dark ages when it comes to dealing with these issues. I am aware of one Judge who has been fined three times for rough handling, does he still accept appointments? Yes, he does, because the Kennel Club do not see this misdemeanour as a major offence.
I suppose it is just as well that I do not work at the Kennel Club, my attitude to anyone who hurts a dog either by incompetence, design or habit should have the red book thrown at them, at speed. Alternatively load them onto a table at a show and I would be happy to demonstrate the downfalls of inappropriate handling of a sentient being, as permitted by the Kennel Club of course.

React to this article:
Growl
37 Wags