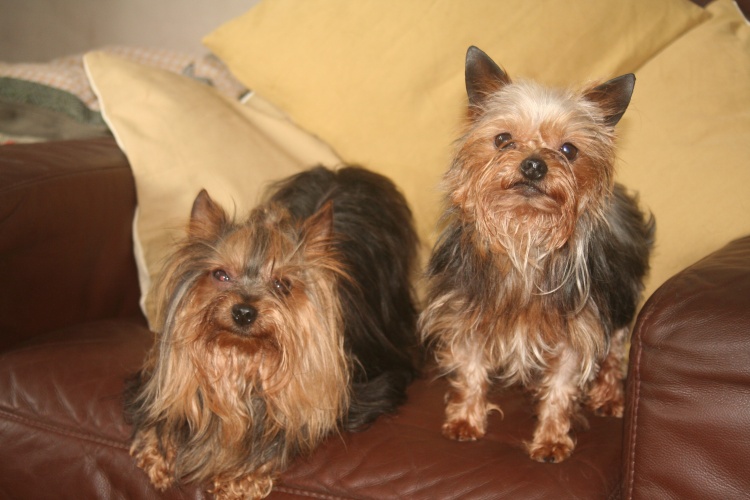 It is cause for a celebration if your ten year old Yorkshire Terrier gets to ten years of age with a full set of gnashers but did it really need seven Police Officers from the Met to seize him at eight o’clock in the morning?

Alfie is owned by a wonderfully eccentric Italian lady Claudia Settimo-Bovio, she is in her seventies and Alfie is her constant companion. Like most small companion dogs he is fearless and protective, these assets make him a fabulous and staunch friend for Claudia and gives her the confidence to live alone in Kingston-upon-Thames, not that leafy Kingston is a hive of criminal activity but the opportunist thief is everywhere. Two months ago, on her birthday the 23rd of June, Claudia answered the door to a courier; Alfie took exception to the man on the doorstep and shouted his displeasure. The courier took to his heels and unsurprisingly, Alfie followed him at speed down the path. The courier fell in his headlong flight and Alfie surprised at his foe suddenly on an eye line with him stopped and continued to shout. A neighbour heard the commotion and quickly scooped the incensed Alfie into his arms and helped the courier to his, very unsteady, feet. Alfie was passed back to Claudia and the Good Samaritan neighbour drove the courier, who was still shaking badly, to local A&E. The courier was seen by Doctors at the hospital, there were no injuries apart from shock and the kindly neighbour drove him back to the scene of his fall. Unfortunate incident for sure but no harm done?
Wrong!
A complaint was made to the Police and under the Dangerous Dog act a decision was made to seize Alfie. The fact that it took two months to come to this decision without any communication with the owner and the further extraordinary force that turned up first thing in the morning to hammer on the pensioner’s door is astounding!
What on earth were they thinking? Seven policemen and a dog unit, apart from the ridiculous light this places our police force in, just who paid for this almighty operation? That will be the tax payer then, you and me. The keystone cops have nothing on this blunder or was it a slow day at Kingston Station.

The anguish Claudia felt as her dog was taken from her must not be underestimated, this was a major shock and while there most certainly is a funny side to this situation, we can only try to put ourselves in her position as her faithful companion is forcibly taken from her with little explanation. Claudia feared she would not see Alfie again.

A week later Alfie was returned to a delighted Claudia, Alfie turned his back on her for two days and was most indignant. Meanwhile the Police stated that “further action was being considered” well let’s hope that they leave the grappling hooks and pawcuffs out of it next time!


It is the Dangerously out Of Control part of the dangerous dogs act that could be yet another nail in the coffin of freedom to enjoy our companion dogs.
Having owned GSD’s and Giant Schnauzers in the past I know what it’s like to have people cross the street to avoid close contact with what must appear to the dog fearful as a wolf and black shuck! We acknowledge that large dogs can be intimidating to those who are unused to dogs of mighty girth and as a responsible owner I hope you take note and ensure that you don’t add to their fear. Our society has become one that seeks to blame, we are also stifled by a sense of political correctness that insists that even a completely ridiculous scenario has to be treated with due care and has to be seen to be attended to.

In an age where a an individual believes it is acceptable to call 999 and ask for an ambulance to take him home because he has had too much to drink or to take up resources at A&E because of a papercut we have to accept that common sense has now shuffled off it’s mortal coil and is as dead as the proverbial Dodo. Instead we have replaced our old friend with “the blame game”, don’t expect facts to get in the way of emotional finger pointing, rational behaviour will not win the game.

There is very little difference between those who choose to blame their situation on those in their immediate circle or whether they choose instead to blame Politicians or Society; it is always someone else’s fault. So deep is this conviction within our society today that personal responsibility has taken a step into the shadows .For instance a would be thief breaks into your house or car, this is a premeditated action , your dog reacts in a rational way for a dog and protects the property with the only ‘weapons’ he has, teeth and claw. The thief is injured, the facts are clear and yet…Throw rational thought to the winds, you are now not a victim, the thief is, your dog is not a brave and wonderfully loyal dog , he is a dangerously out of control animal.
The blame game, a game for everyone with no personal responsibility can play and win.

As dog owners we have welcomed any efforts to reduce the number of unwanted dogs, we have cheered as more people are encouraged to train their dogs to be sociable and we have wept as innocent dogs have died in strangers arms and been bundled into a dustbin bag because of the way they looked. Isn’t it time we stood up for our companions, dogs are a part of our culture and they are not going away.
They are sentient beings and yet in the eyes of the law they are still as animate as a chest of drawers. It is time we recognised the part they play in our world. When I say we, I mean all those who choose to live in this country or visit it, our rights as responsible dog owners should be recognised and that includes a degree of understanding from the populace as well as respect.

React to this article:
Growl
22 Wags