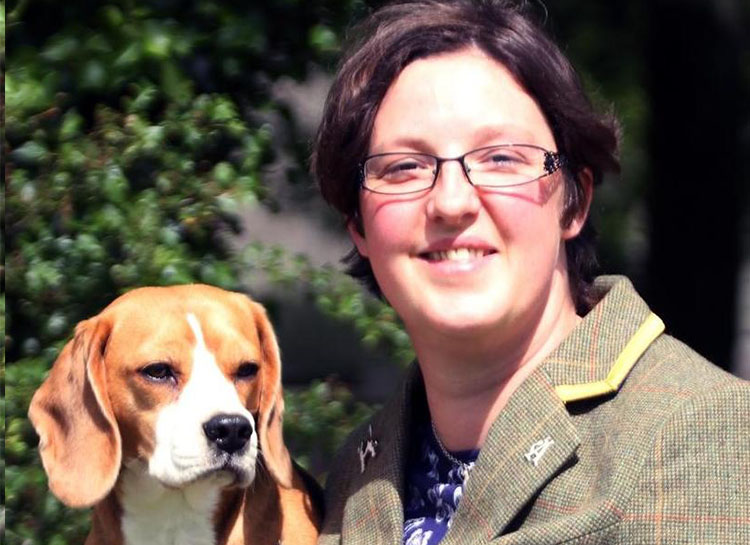 I owe everything to our foundation bitch "Hollybourne Apple of My Eye at Alandobel" pet named "Izzy". Izzy joined our family in March of 2006 and I have never looked back.

Your first show dog is something extremely special, Izzy and I certainly learned the ropes of showing and embarked on our handling career together. She was indeed the perfect handling dog really for all the wrong reasons.

There is a saying that your first show dog is for ruining and I'm not sure who ruined who to be honest! She was a stubborn hound who would show but on her terms. She had to be show on a loose lead, would be temperamental when stacked and if she wasn't in the mood she just wouldn't move! I withdrew once because she was so backward on the day that I was dragging her round the ring, there was nothing wrong with her, she just decided that on that day she didn't feel like it.

I retired her from handling competition when I bred my first litter from her and we kept her daughter Alandobel She's a Rebel (Pepper). This was also when I purchased my affix and in the previous year had become an affiliate member of the Kennel Club. Pepper was more compliant than her mother and we started to have much success in the handling ring. Sadly though Pepper had a bad experience in the breed ring and went right off showing completely, so she was retired and lives a life of luxury as a pet at home.

I then purchased Lanesend Chica for Alandobel who took me further in handling competition than I had ever been before then her place taken by Lanesend Segenhoe JW ShCM (Braxton) who is my current handling hound who has given me wonderful success in the breed and handling ring. Braxton is owned in partnership with my very dear friend and mentor Ann Phillips of Lanesend Beagles fame.

Izzy was a true trailblazer for me, she came back as a veteran and had phenomenal success showing her socks off! She was a different hound, I suspect that the sausages that are awarded to all veterans at beagle breed shows played a major part in this new found enthusiasm for showing. She was attacked by an Akita early on in her veteran show career and I feared that definitely would be the end of showing her but in true beagle fashion she bounced right back! She took numerous best veteran bitch awards, best veteran hound (both open and championship shows) and two best veteran in shows-one from a breed championship show and one from Gloucester and District open show 2016.

She was an amazing introduction to the world of showing dogs for me, I'm blessed that I had such a wonderful character and friend by my side both in and out of the ring. I am in debt to her for all the joy she brought me and for all the friends I have made through showing. She leaves a massive void in my heart, home and life and I will miss her every day. She truly was my "heart hound". Izzy crossed the bridge after a very short illness on December 27th 2016 and is dearly missed.

Outside of the show ring I am a committee member of Coventry Ladies Kennel Society and West Mercia Beagle Club on which I am also treasurer. I judge beagles and borzoi at open show level and obviously I am an avid competitor and judge of handling! I enjoy reading (I have amassed an amazingly large collection of books, much to the horror of my husband), films and running. I also own a retired racehorse, who is completely retired now, called TC who is 25 years young.

React to this article:
1 Growl
10 Wags