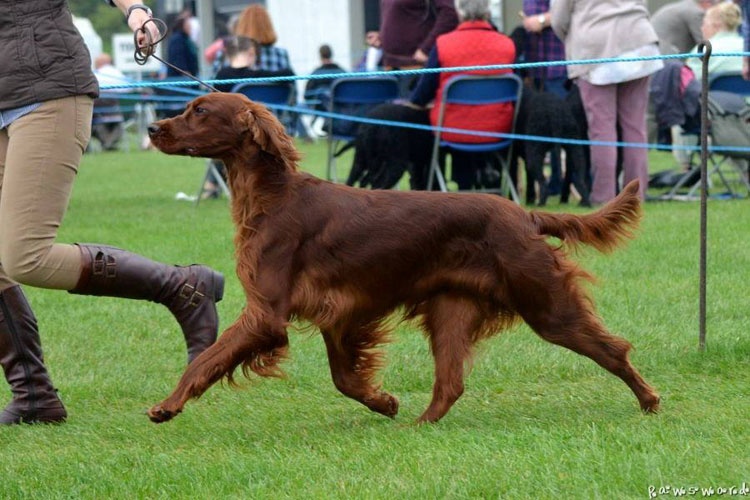 So the cut-off date for entering the finals has passed. Now we are all hopefully waiting and practicing in anticipation!

There is no doubt that perfecting skill for competitive handling comes from hard graft and learning from ones mistakes.

I have been handling for over 10 years now and I very much acknowledge that I do not know everything there is to know about handling competition. I have seen varying levels of difficulty at the adult handling finals and each judge has always been looking for something in particular.

I have been asked to do anything from the humble “triangle and up and down” right through to complicated pattern work and gaiting dogs together.

When it comes to the basics I would ensure that you practice – the amount of people who cannot achieve a decent triangle is surprising to say the least. Straight lines are another point that some handlers fall down on and this in turn will result in untidy corners. Triangles are the very basic pattern that everyone, handler or no, should be able to produce. There is no real excuse for not being able to do this as the amount of practice you can have just from the breed ring is extensive.

Lead tidiness is something that I still notice in the handling ring as not being practiced. You should wind you lead in your hand so that it is tidy but can be released easily if needed. It’s not a hard and fast rule but a trailing lead for me just ruins the overall picture.


I wrote about anatomical and breed knowledge last week, I think when you are in a finals it is certainly not unreasonable of the judge to expect a certain calibre of handler. If you have made it to the finals you should have a certain level of skill. In my opinion judges on the circuit should be taking this into consideration. As a judge would you send through a handler who did not have the skill set for the finals? It does need to be considered….. It is the same as judging at championship level – in the majority of classes dogs qualify for Crufts, judges to need to consider that as well as considering the dogs compatibility to the breed standard.

In numerically strong classes it is easy to sort the wheat from the chaff – but what if only three handlers are present? What if only two of the three are at a sufficiently high standard to put through to the finals? Would and could you withhold?

It is the case at the moment that the level of handling across all age groups is extremely high and I am really pleased to see that handlers that came under me as a judge say 12 months ago as a novice, have gone away and learnt and improved to be right up there with some well-established handlers. I think that it is the ability to improve quickly (when the effort is put in) that makes handling popular as a competitive arm of dog showing.