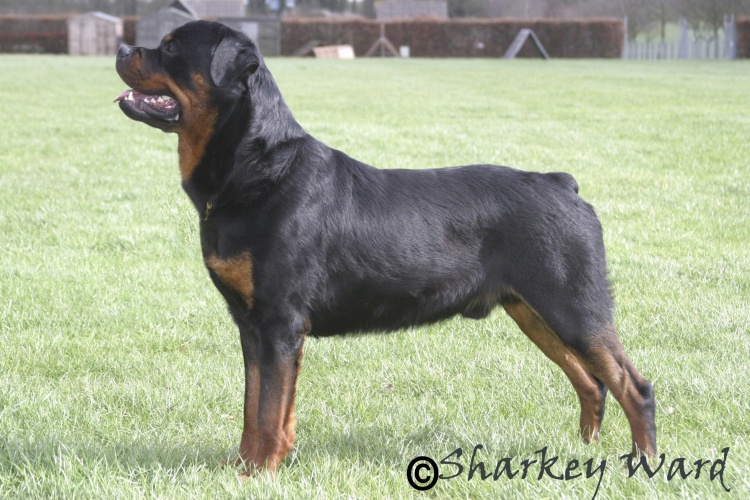 12 dogs also took and passed their temperament test and the popular sculpture raffle raised over £340 for Rottweilers In Need so i make no apology for hounding you all to buy tickets, the winner was Jackie Shaves.

Now it was time for BIS judge John Bond to earn his lunch, he awarded BIS to Juffther Happy Bunny and RBIS & BOS to Ch Firemoon Amis Avie JW

Linnet had an exceptional day raising over £200 with her home baked cakes for Rottweilers In Need, Linnet you are a star.

Time for 40 winks and onto Eastern Counties garden party Championship show with the sun shining and strawberries and cream a perfect Sunday.

Barbara Morris was BIS judge and awarded it to Warrimead Kustom Made rounding off a perfect day for Marie. RBIS & BOS Darkarmar Eminem

Well done to everyone, anything you want putting in the notes just let me know

Sent from my Windows 10 phone

Congratulations to you all.

Leeds was wet, we had torrential rain, heavy rain and downpours in between, judging was delayed for half an hour to allow exhibitors extra time to get onto the show ground. However, once judging got under way the rain stopped and eventually the sun came out.

Both DCC & BCC were sired by Jo Barnes Gyrima The Aviator (Denzel) who I am guessing got a rather special tea that night!

Congratulations to you all.

Apologies if there are any spelling mistakes but spell check doesn't work on most of the dogs KC names!

If you want anything put in the notes ie closing dates, shows, any other news or information contact myself or Becky Gibbard.

Sarah Morgan has recently stepped down as breed health co-ordinator due to work commitments. Sarah did a great job and I am sure she will be missed, but fortunately Paul Perks has taken up the post. Paul is also health co-ordinator for Russian Black Terriers, so has experience in the post and I am sure he will do an excellent job. Well done Paul for taking on what is not always a popular job.

Finally Denise Colman will be joining me in writing these breed notes on a weekly basis. In this new format we have a lot more freedom what we can write, so if you have any breed related news/topics, show dates, or success in any field and you would like a mention, please get in touch with either myself or Denise.