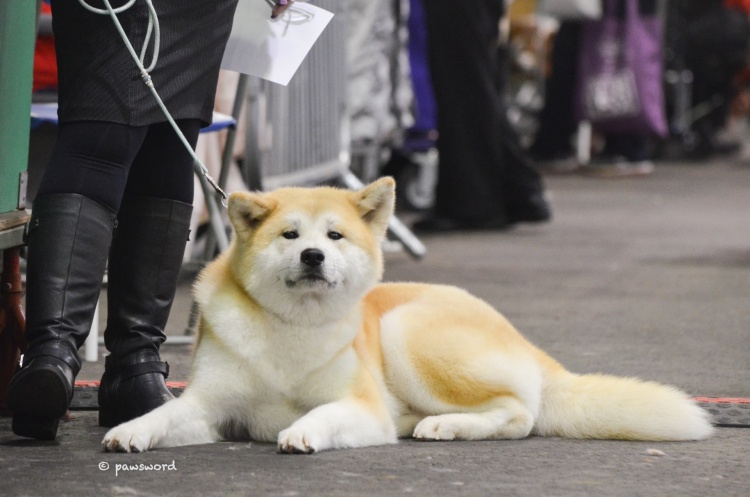 21.09.17
Sorry for the delay in notes. I have started a new job and now don't seem to have as much spare time as previously but I will ensure to provide weekly notes with any news or information I have.


Firstly, I have to make an amendment to the previous notes as I did unfortunately make a mistake. Best puppy at City of Birmingham Championship Show was Tsoyu Murasaki Go and best junior was Tsoyu Kokoro No Hiroi who I had previously listed as BP so apologies to owners.


Darlington saw our judge Espen Engh award BOB BB and BP to Shelly Bennett and Pete Chapman's Tsoyu Murasaki Go, BOS was INT CH Kaidou Go Shirai owned by Wendy Phillips who also took a fantastic Veteran Group 3 under Patsy Hollings, Reserve Bitch was Jaidev Saki Cho Hime Go who is owned and bred by myself and Ricci Morgan and Reserve Male was Tsoyu Hamako Go who is owned by Shelly Bennett and Pete Chapman. I hope you all managed to avoid the traffic that was building up on the motorway on our way home and I was glad to hear Wendy got home to West Wales after forgetting to fill up with fuel, no doubt from the excitement of the lovely veteran group placing, at least the long journey was worth it!


Looking forward we have Belfast this weekend. I really hope the weather and sea conditions are kind for the crossing this year because last year it was certainly a rough crossing which required a few of us to have several gin and tonics during the crossing, purely for medicinal purposes of course.


If anyone has and news, views or updates please email me at jaidevakitas@gmail.com for inclusion in next weeks notes.
Leigh Curtis

07.09.17
Wow what can I say! The Japanese Akita Inu Club UK held the 10th anniversary show this week in conjunction with City of Birmingham Championship Show.
Our judge was Ms Tracy Morgan (Rossimon) who found her winners from a good entry. Int CH Kaidou Go Shirai was BISS out of veteran and at just shy of 10 he certainly showed the youngsters a thing or two proving age is just a number!
Our homebred girl Jaidev Saki Cho Hime Go was Best Bitch and RBISS after winning open bitch, Reserve Bitch was Tsoyu Fuyu Tora Matsukita owned by Mathew and Sue Buckley with Reserve Dog going to Tsoyu Baku Go Kyoshi owned by Karyn Fowkes. BPISS went to the new kid on the block Wendbarry Hamiso Go, a great result for his first show!

Following the club show we had a breather whilst shibas were being judged. Mr Albert Wight was our replacement judge, it was his first time judging the breed and his main winners were Kenichi No Mitsuru Go Charadon who was BOB and later Group 4 under Luis Pinto Texeria and BOS was Jaidev No Setsuko Ayami Go Charadon who is the current top Akita Inu, owned by Charlotte Andrews. BP was awarded to Tsoyu Kokoro No Hiroi owned by Natalie Wiesmuller and Maureen Thompson.

The atmosphere was good and I'm pleased to say the breed is regularly attracting onlookers from judges and fellow exhibitors of other breeds and it was very refreshing to hear positive comments about the breed but especially in respect to the improvement to structure and movement so keep up the good work because it's paying off with recognition from peers.

Next week at Darlington we have highly respected all round judge Mr Espen Engh who has attracted an entry of 19. Mr Engh regularly judges the breed in Europe and further afield including an appointment at the World Show in Paris. I hope you all have a bit of rest and relaxation in between to recharge the batteries and of course have a safe trip to the show.

Belfast has a disappointing entry of only 3 JAI. This is a show that doesn't attract high entries, probably due to the logistics and expense, however entries have been higher in previous years. In the past exhibitors have travelled together, splitting the cost of the ferry which makes it a lot more affordable, so maybe this is something to consider for the future to ensure we retain breed classes at this friendly and well run show.

22.08.17
After Paignton we had a two week break between Championship shows and within that two weeks it seems some of the dogs decided they no longer needed their coats so promptly dropped them which of course tends to happen this time of year.
As a result there were 6 absentees at WKC but nonetheless our judge for the day still had a total of 14 dogs to judge, which isn't a bad number at all considering there are only six classes scheduled, being mixed veteran, puppy, post graduate and the open dog and open bitch.
Most championship shows are now well attended with numbers of regular exhibitors and dogs in the breed slowly rising so with that in mind it would be beneficial if societies would schedule single sex classes, therefore encouraging exhibitors to enter more dogs but that is another subject.
Anyway, after a good few days of rain in previous days the weather was kind to us and held off with even periods of sunshine breaking through at times. Outdoor rings had been set up so we had the pleasure of being judged outdoors which is always nice, especially considering the lovely setting at The Royal Welsh Showground which is most definitely one of my favourites.

Mr Mallard found his principle winners in Kenichi No Mitsuru Go Charadon owned by Charlotte Andrews who was BOB and later shortlisted under Dr T Jakkel from Hungary, BOS was Jaidev Saki Cho Hime Go who is owned and bred by myself and Ricci Morgan, Reserve Dog and Best Veteran was INT & IR CH Kaidou Go Shirai owned by Ms Wendy Phillips and Reserve Bitch Vladtepes No Hiromi Go owned and bred by Tina & Chris Thomas and last but by no means least BPIB went to Nosferatu's No Tori Bussi Go owned by Miss E Woodward.

We can all now have a little breather and bath, bath and bath in an attempt to get enough coat back before City of Birmingham which has seen a change of judge for us from Mr Tim Ball to Mr Albert Wight. The Club show which is held in conjunction with City of Birmingham is being judged by Ms Tracy Morgan and the special classes will be judged by Miss Ashlie Pike. Entries have now closed for both shows!

Please remember if you did win any trophies at last years show the Club will need them to be returned.

I wish you all well with coat preparations and look forward to seeing you all on 3rd September but in the meantime if you do have any news you wish to share please email me at jaidevakitas@gmail.com

12.08.17
I'm extremely grateful to have been given the opportunity to write the breed notes for Dog Focus for my beloved breed the Japanese Akita Inu.

Following the sad demise of Dog World there has been a few weeks without notes so I'll update you with show results since July. If I have missed any I sincerely apologise.

As always the UK bred dogs have been travelling to fly the flag for us in Europe with great results. Myself and Ricci Morgan travelled to the super North Sea Dog Show in Dunkirk where we met up with some of our fellow French and Belgian friends and exhibitors which is always a pleasure. Our homebred team done us proud with our CH Jaidev No Katsu Go taking BOB, CACIB and CAC and his half sister Jaidev Saki Cho Hime Go being awarded BOS, CACIB and CAC.

Welsh Kennel is fast approaching which is also the date the entries close for the Japanese Akita Inu Club UK open show entries close so please ensure you have sent your entries into the secretary in time or take them to the show where I'm sure the committee attending will be happy to accept them.

Im sure it's no secret that the amount of Akitas and Japanese Akita Inu needing the assistance of rescue has been rising, which is causing a strain, I have therefore been trying to think of ways we can support them and help to take the strain off and one of the ideas was setting up an account where breeders and stud dog owners can deposit an amount, at their own discretion, when they sell a litter or receive a stud fee. This has received some positive feedback but as it's early days I would gratefully receive any views or ideas on this idea or others such as fun shows and events to help raise money.

If anyone has any news, views or information to share please send them to me at jaidevakitas@gmail.com so I can include them in next weeks notes