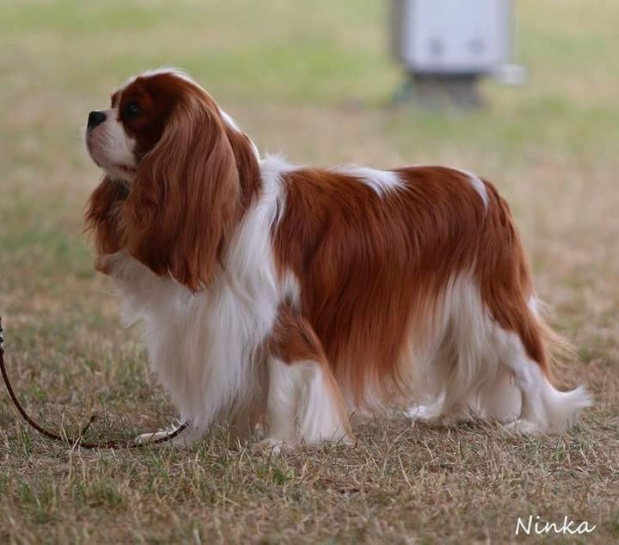 Hello all
Just to introduce myself as the new Breed Notes Contributor for Cavaliers.

Please feel free to let me have all your breed news - Anything is welcome show results, obedience, agility, interesting stories and tips. In fact anything you feel would be of interest to other Cavalier enthusiasts. This is your column!

I attend most Championship shows and many open shows, so feel free to come and chat - news is always welcome.
Roxanne
28.09.17
Breed notes
As the warm summer weather slips into distant memory, we embark on the last few outdoor shows of the season. Lets hope that rain is not going to be the main feature of this Autumn.
Darlington Championship Show - 17/09/17
Mud! Glorious Mud! Granted the mud was not deep - though I spotted the tractor in the carpark as I was leaving - but the liquid surface mud was certainly a challenge! The trolleys kept the dogs clean but many exhibitors arrived at the benches looking like they had been on a cross country run!
However in between rain showers, the sun shone and raised everyone’s spirits - and as ever the “posh loos” were a talking point on Social Media.
.
Principal winners - judge Leila Tarabad (Khatibi)
Best of Breed – Smith’s Crimbledale Jemima at Beaudale
Best Opposite Sex – Hughes’ Ch Loranka’s Cupid JW
Best Puppy – Long’s Arroline Euphoria
Best Veteran – Rees’ Ch Tusculana Carmella At Embeth

Belfast Championship Show 24/09/17
The annual pilgrimage across the Irish Sea was a little fraught for many this year if reports on social media were anything to go by. Late ferries caused havoc for many, especially for the Saturday classes.
Cavaliers did particularly well this year with placings in both adult & puppy groups under judge Espen Engh
Principal winners - judge Tanja Engle (Angel’s Pride)
Best of Breed & G2 – O’Brien’s Valentyne The Irish Tenor
Best Opposite Sex – Whitfield’s Aristor Pink Topaz For Bevelmount
Best Puppy & PG2 – Long’s Arroline Euphoria

The next championship show is Driffield with toy day on Sunday 1st Octobe - the last outdoor show of the summer season.
Perthshire Canine Club held their open show recently. Best of Breed was Slack’s Willowheart Louis.

Obreedience
Team Captain Lucy Dawson, has let me know that the Canny Cavaliers are currently lying 6th in the National Points League and with three heats still to go, its all to play for! The team dogs are all veterans, with the two oldest being 12 & 13 years old - proof that cavaliers can be active well into their veteran years.
Rally
Cavaliers continue to have some success in this relatively new dog sport which combines elements of formal obedience with obstacles and agility type exercises thrown in for good measure.
Rally involves the handler and dog working as a team to navigate a course with numbered signs indicating different exercises to perform; think of it as a sort of 'obedience exercise obstacle course' including simple exercises. Titles are gained by achieving qualifying scores & scores over 190 out of 210 are graded as Excellent (EX)
At the recent Lagotto Romagnolo Club of GB Rally Trial, the following cavaliers achieved Qualifying scores:
Kate Hughes’ Ruby Roo RL1 gained a Level 2 & Level 3 qualifying score , both at Excellent.
My own Wynncliff Lady Karly of Beaconsfylde - who has only recently begun to compete in KC Rally, at 13 years old - gained a Level 1 & Level 2 qualifying score, again both at Excellent.
Another newcomer, making their debut in Rally at the LRCGB trial, was Janette Ross and her enthusiastic ruby boy, who also gained a qualifying score at Level 1
For anyone interested in Show critiques, and/or judges who have judged cavaliers, there is a new Facebook group for posting critiques exclusively for cavaliers. It’s called Cavalier Show Critiques.
If you judge or show do join and make it a success.

That just about catches up with all the news I have so far.
I’d still like more news if you would like to send it in, especially for Open shows - Don’t be shy.


07.09.17
Another Friday show day for Toy breeds, and another nightmare trip home for many of us! Many people reported it taking more than double the usual time to get home, due to hold ups. Speaking for myself, it took me over 4 hours to do a journey that normally takes less than 2 hrs, so I can sympathise!
The new Junior and Veteran groups seemed to cause a lot of issues when the society decided to follow the FCI system and judge Best Veteran & Best Junior after each ring had completed judging the appropriate class. This led to confused exhibitors having to run back and get dogs that were relaxing in crates and, certainly in the two Cavalier rings, a lot of waiting with empty rings whilst the other ring caught up and each was judged.
There also didnt seem to be total consistency, if comments on Social Media are anything to go by, with some breeds doing them after the Best of Breed was declared instead. Love the idea, but perhaps a rethink on execution for next year?
Principal winners for judges (D) Mrs G J Lilley (Kensing) &
(B) Mrs C Roe (Sunshoo):
Best of Breed : Williams’ Sancana Daddy Cool ShCM
Best Opposite Sex: Rix & Berry’s CH Ricksbury Rumour Has It JW
Best Puppy : Firth’s Glebeheath Jeremiah
Best Veteran: Morrison’s Lewisisle Higland Hamish ShCM

The next championship shows will be Richmond on Friday 9th September, followed by Darlington on Sunday17th September.

Jan Cole from the Isle of Wight tells me that her boy Oliver (Carolus Don Barzini) has recently passed his Gold Good Citizen Award. Achieving the Gold Award is no easy feat, so well done Oliver and Jan!


The Cavalier King Charles Spaniel Club presents:
Puppy of The Year, Cavalier of The Year & Veteran of The Year
On Sunday 15th October 2017 at the Wroxall Abbey Estate
Birmingham Road, Wroxall, Warwickshire, CV35 7NB
Why not join them and help make this competition the most prestigious event in the Cavalier Calendar? Guests welcome. Two course lunch and tea/coffee included in your ticket. Bar available.
The competitions are to be judged on a ‘match’ format by a panel of JUDGES:
Mrs Paula Stark (Tayfern)
Mrs Sylvia Lymer (Lymrey)
If you have qualified your dog, you will have received your entry forms by now. Don’t forget the closing date is 11 September.
Guest Ticket details on the Club website www.thecavalierclub.co.uk

Dont forget to let me have your news and stories.
Roxane Hobbs

The latest Championship show results are for SKC, where cavaliers enjoyed success in the Toy group once again, with Best of Breed Valentyne The Irish Tennor winning the group under Kevan Berry (Ricksbury). Congratulations to all connections!

The next Championship show is City of Birmingham at Stoneleigh, with toy day on Friday 1st September, closely followed by the Humberside Cavalier Club Open show on Sunday 3rd September at Bircoats, near Doncaster.

The Kennel Club Junior Warrant Competition 2017 is open to all dogs of any breed that gained a JW between 1 July 2016 & 30 June 2017.
Twelve heats are held at open shows across the country, with five dogs qualifying from each, to go forward to the semi-finals at Discover Dogs, at the EdExcel Arena, London on 21st October.
As far as I am aware, the only cavalier to qualify so far this year is my own Beaconsfylde Catch The Kiss JW ShCM. If there are any more please send me the details ASAP!

Obreedience
The Canny Cavaliers Obreedience Team has been out and about, with the latest result from Discover Dogs at the East of England Showground in July, where the team was 3rd out of 10 teams, leaving them standing 6th in the National Rankngs so far. The team will be on thevroad again in September, so look out for us!

The team consists of:

All except one of these dogs are shown and are successful in their own right in the Show ring. Even more exciting is that they are all veterans!
The oldest being Wynncliff Lady Karly Of Beaconsfylde who has just turned 13 years old & Willowtump Athelas At Luphenex is 12 years old! So you see Cavaliers can be long lived and active too.

The purpose of Obreedience is to encourage more breeds to 'have a go' at some of the tests associated with competitive obedience but in a less formal competitive environment.

The Obreedience display had its third successful year at Crufts this March with the GSD team emerging as eventual winners.

Obreedience is a team event and showcases the talents of each breed through a series of fun exercises and it is perfect for all ages and abilities.

It mixes the best aspects of obedience with the camaraderie found amongst breed enthusiasts, each Obreedience team must comprise of four handlers and four dogs of the same breed who take part in two rounds of competition including a round of heelwork performed together as a group and then four set exercises including a retrieve, a 'send to bed', commanding the dog to stop, and a scent exercise.

Well that’s it for now. Get that info & news rolling in!
Roxane Hobbs