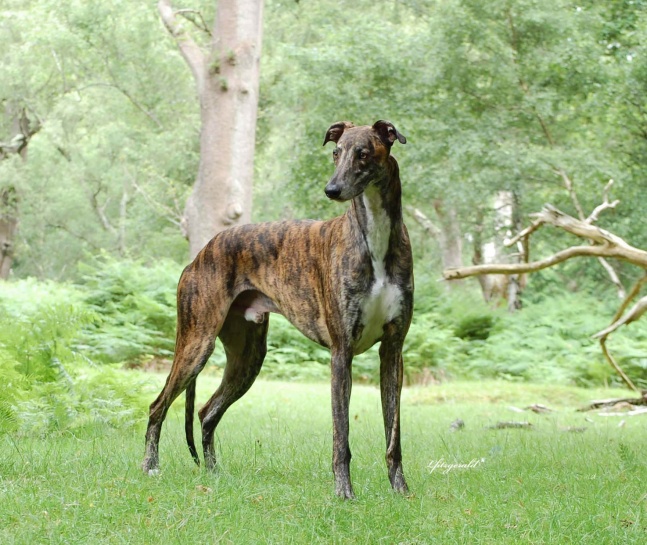 Thank you to Dog Focus for giving me the opportunity to write the Greyhound notes.

If you have any news relating to Greyhounds, show or otherwise please message me on Facebook or email zoradenwhippets@outlook.com

A cold and wet day at Richmond with some wind as well to top it off!
Nevertheless, the greyhounds were judged at a relatively warm part of the day and we were able to make the most of the ring.

An entry of 14 at Darlington on Friday, I hope to get over the watch the greyhounds.


At City of Birminghman's 75th Anniversary show we were judged by Mr Ian Bond.

BCC & BOB was Elaine Newsham's Ch Europa Decuma Via Windspiel (IMP), handled by Bob Newsham - they later went on to win the Hound Group under Miss Jenny Startup who had given her a CC at Leeds this year.
I watched them on the live feed for BIS and they put on a great performance.

At South Eastern Hound Club Premier Show on Sunday a huge entry of 18 for Diana Webber with 14 present.

BOB and shortlisted for BIS Jody Cutter & Hadley Lubin's Zoraden My Girl for Chosovi handled by myself as Jody & Hadley were on holiday. I was delighted to be able to take home the beautiful trophy for them donated by Joy Battley, which replaced the missing trophy.

There were special rosettes and prize money as the classes were sponsored by the Greyhound Club.

Some super photos of the day posted by Elaine on facebook.

At SKC on sunday only one entry with no CC's for Mrs J Kay. Taking BD and BOB was Kathy Spacey's Inchydoney Memories North Star at Halliam's.

Andrea Spurr posted on Facebook that her Grandcru Pierro at Suttonelms finished his ShCex in style at Leicester CS with BAVNSC and Hound Group 2. Believed to be the first greyhound to achieve this award. Congratulations.

We have CC's at City of Birmingham on friday and a fantastic entry of 18 at South Eastern Hound on Sunday for Diana Webber.

Entries close on Monday 2nd at midday for Driffield, we have a great classification of 20 for judge Mr Robin Searle.

Any news please let me know.


A very damp day out for Welsh Kennel Club where the rain got progressively worse throughout the day!
We were under cover and the weather was fairly good whilst the judging took place. Our ring was a little too narrow to turn easily at the end and not that level. The dogs and owners all seemed to cope well.

BPIB was Claire and Helen's Rishworth Out of the Blue Ad Honores, who went on to win Puppy Group. A fabulous critique for her online from Puppy Group Judge Nick Gourley and I watched her put in a great performance on the live stream of BPIS.

Information about the Great Greyhound Gathering is now on facebook, to be held at Nottingham Racecourse on Saturday 7th September 2019.

The Greyhound Club Congress Committee are working very hard on the Greyhound World Congress for 2021.
To be held from Friday 2nd July - Monday 5th July 2021.
Any ideas for speakers, topics or activities please get in touch.
https://greyhoundworldcongressuk2021.wordpress.com

I've just seen on facebook Joy Battley has donated a beautiful trophy for BOB at South East Hound to replace the one that was lost.

In the Summer edition of the Breed Record Supplement there were five new registrations of single dogs, one record of an import and three records of an exports pedigrees.

Any news please message me on facebook or email zoradenwhippets@outlook.com

The South West Hound Open Show was also on the same day and I haven't seen any results other than Clare & Ina's Design winning BOB and a lovely of picture of her winning BIS 4 under Helen Wayman.

Another very happy photo on Facebook; of Kathy Spacey's Inchydoney Memories North Star at Halliam's winning RBIS at Kirkcaldy Open Show, a lucky show as he was BIS the year before.

No classes for us at Bournemouth this week but maybe a chance to get City of Birmingham, Richmond and Darlington entered!
There is also South Eastern Hound closing soon, there are 5 classes for judge Diana Webber sponsored by the Greyhound Club.

Any news please send to zoradenwhippets@outlook.com


30.07.19
Jenny Startup had an entry of 19 greyhounds at Leeds with one absentee.
It seemed quite a long wait being 3rd in the ring.
The ring was just large enough for the greyhounds to move out and felt quite a difference to me; after being in much larger ring earlier on in the day with the whippets.

The greyhounds had two lovely places in the stakes with Kathy Spacey's Inchydoney Memories North Star at Halliams coming 3rd in the Pets as Therapy stakes under Albert Wight.
Sue Shakespeare's Zoraden a Little Tenderness with Cairdean was 2nd in the Good Citizens stakes under Mr B Croft.
Both had very large entries and a good amount of prize money too!

Thanks to Lorraine Fitzgerald for the following information - Mrs I Horner (Bokoto) awarded Slippery Louise of Adachi Best AVNSC at Dorset County CS last Sunday. Lucky show for these two as they were awarded Reserve Best AVNSC last year, great result for her owner Jade Browne and her racing bred greyhound.

The Barley kennels spent Saturday night at the Peterborough Racing Stadium promoting their black greyhounds with their "50 shades or black" slogan. The greyhounds used their charms and hopefully some more will go to the homes they deserve, they also raised some funds for the Peterborough Greyhound Trust.

Over the week Helen Wayman did a facebook raffle in aid of the Barley Kennels and Karmas Cave Greyhound Sanctuary.
Helen had won a Tuffies bed herself and kindly donated it for the raffle.
The raffle sold very quickly and raised £150 for each charity.

No CC's next sunday for greyhounds at Paignton, there is an entry of three dogs in four classes for Mrs J Cooper, second in the ring after Wire-Haired Dachshund.

Any news please let me.

At Southampton Show this weekend; Michaela Howlett's - Skyswift Moonlight Serenade won Best of Breed under judge Lorraine Fitzgerald, Hound Group 1 under judge Richard Morris on the Saturday.
They returned to compete for Best in Show on Sunday and had a wonderful result with Reserve Best in Show under judge Sue Wilkinson.
Some lovely sunny photos on facebook as well as rosettes and a trophy. Well done!

On Sunday I travelled three hours to Oswestry Open Show and had the pleasure of judging a young greyhound male in the AVNSC puppy class.
I later found out this was Elaine Bogart's new import - Ina's Fashion Exalted at Incitatus at his first show
I was delighted to award him Best AVNSC Puppy and Puppy Group 1.
It was a lovely show, set in very large showground and the weather held out, not being too hot or cold.
I later made friends with Elaine on facebook and again some photos of the day.

Sorry if I missed any results as I said happy to receive any greyhound news.

Looking forward to seeing everyone at Leeds on Sunday, an entry of 19 under Miss J Startup, we have 11 classes with Special Beginners being mixed sex. We are third in the ring behind Basenji and Finnish Spitz which gives me time to show my whippet puppy first!