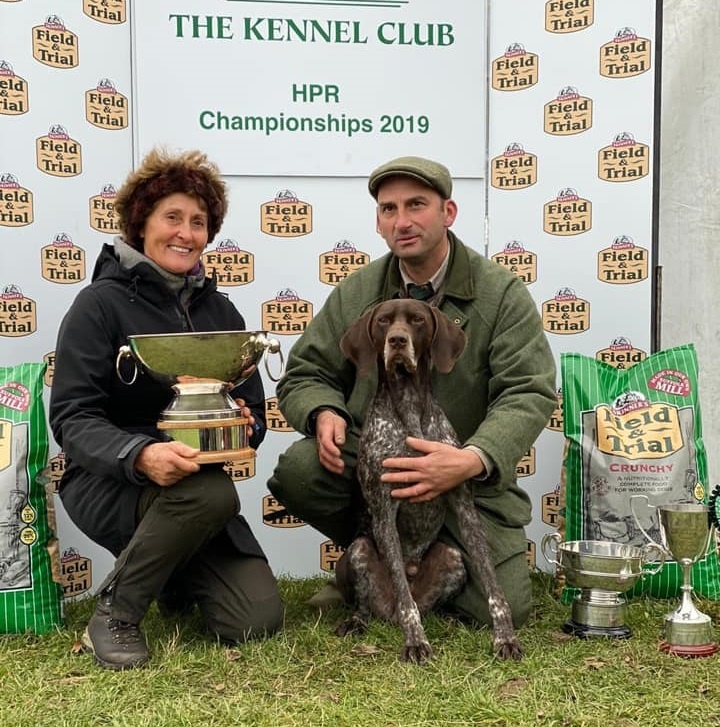 FT Ch Aytee Jumbo Jet of Islasbraw, a six-year-old German Shorthaired Pointer from Perthshire, has won the Kennel Club’s Hunt, Point and Retrieve (HPR) Championship for the second year in a row. Sponsored by Skinner's Pet Foods Field & Trial, the event was held at the Swinton Park Estate in Ripon, North Yorkshire by kind permission of Lord Masham.

Jumbo Jet, known at home as Lewis and owned by Darryl Elliot, was awarded first place at the competition which saw talented working gundogs from HPR breeds tested on their natural working ability. The judges were John Naylor and Peter O’Driscoll.

Darryl said: “Firstly, on behalf of all the competitors I would like to pass on a huge thank you to Lord Masham for the privilege to run our HPR dogs on what is perfect ground, and for Garry Taylor and his team’s perfectly organised supply of game on both days.

“Lewis is one in a million and a dog of a lifetime. I could go on but I just feel very fortunate to have met him. It’s about team work and forging that understanding and trust between yourself and your dog. Few things are as close to my heart as this.”

A Kennel Club spokesperson said: “The HPR Championship showcases some of the most talented dogs within the HPR breeds, and demonstrates the highest calibre of dogs’ quartering, hunting and retrieving skills at championship level.

“Huge congratulations to all the winning dogs and handlers and especially to Darryl and Lewis.”


The results of the Kennel Club HPR Championship are as follows:

Diplomas of Merit were awarded to:

Time and time again I hear good, genuine breeders say “I’ve endorsed my puppies to ensure they are safe”, but just ...

Canine Confab | A Dog Is Not Just For Christmas....

Sleet was driving across the headlamp beams as Lucy crossed the border from Scotland to England. She sighed as she realised ...

KENNEL CLUB’S EVENTFUL INTERNATIONAL AGILITY FESTIVAL 2019 DRAWS TO A CLOSE Dogs and handlers from across the globe compete at ...